Using a statue, you can clip into the corner of the door leading to the end of the dungeon. Using the mini statue, you can skip back tracking with the big statue after getting the Dominion Rod which saves about 5 minutes in All Dungeons and 100%.

Use the setup shown in the video, which yields angle 43533. With this angle, get in the corner, roll once, and then do a second roll on the 3rd possible frame after the first one.

Sometimes this will snap to a different angle, and it seems that most of the time this will be 43541. With this angle, roll once, and use the statue's shadow as a visual cue for when to roll the second time (the third time the shadow swings to the left).

Place the statue in front of Link, then start walking into the corner. Align the 1st heart with the line shown in the video, then do max speed rolls continuously until Link clips. If you drop a roll or the statue clips into the wall, just re-setup and try again.

Place the statue in the corner, then place Link in the opposite corner. C-up and adjust Link's angle until the left side of the second heart aligns with the bottom of the protruding part of the door. Without changing angle, use the dominion rod on the statue, place Link between the statue and the door, and roll. 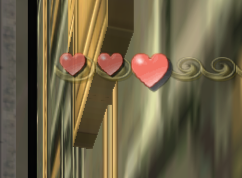 Throw the boomerang at the left pot, then at a precise time use a bottle to make the pot Cutscene Drop from the boomerang onto the switch

It is possible through the use of an LJA and a sidehop to skip Ooccoo who is normally blocking your way at the start of the dungeon. On the way up stand just ahead of the black square shown in the video and LJA slightly left because the trigger is oval shaped. On the way back down stand on the fourth step and sidehop slightly away from Ooccoo you make it past the trigger.

It is possible to skip opening the first gate with the pressure plate with a jump attack. To do this clawshot the target before the gate, the further back you target the easier it will be. Then just press A to drop when Link starts to dangle and B to jump attack. You have a 10 frame window to drop and make the trick work (The first two frames to drop don't work), and a 1-2 frame window to Jumpslash . Some people prefer to mash B then press A while others will just time it.
Drop Window Frame Data

The fastest method but has tight timing, however with practice getting used to have fast to press B after A it isn't that bad. Same drop timing as Gate Skip 1.

It possible to also skip opening the second gate with both statues on the pressure plates with a well timed roll. To do this you want to kill all Lizalfos first, easiest with a bomb-arrow and the keese although you can do this without killing the keese. Next place a pot or statue on the left pressure plate and stand on the other. Once the gate is fully opened you can time a roll through the gate. Please note you want to walk of the pressure plate then roll, rolling instantly will not make it

Use a lizalfos and the boomerang to LHS and grab the top of the gate in front of the poe. This is possible with multiple lizalfos nearby, but it may be easier to kill one or more lizalfos in the area before attempting.

By using the Ball & Chain, you can knock the mini statue off of the ledge without the need for the Dominion Rod. From there you can throw the statue over the gate onto the switch to open the gate

Breaks even with using spinner

Normally to raise the block and to get up you need two statues, one of which is at the bottom of the room which can only be reached by turning the platform in the middle. However due to the fact there is a cutscene the first time you raise the block you can skip getting the one at the bottom making it much faster. Please note if you fail this trick you will have to get the statue statue because the cutscene making thing possible only plays once

1) First place one statue on the left pressure plate

4) during the cutscene hold forward and mash A, due to analog glitch this will make you sidehop and not jump attack

If you fail this, there is a backup that doesn't require the cutscene. Normally in this room you are required to keep shooting the crystal switch with the bow through the holes in the fence, however you can quite simply skip the last two hits by using the clawshot on the target through the hole

By bomb boosting after a MB Jump Strike you'll be able to get over the railing early. To place the bomb in a good spot behind you, b-drop after standing still for a bit.

Normally you need the Dominion Rod to place a statue on the switch, but by using a simple spinner bomb boost, you can get over the gate early. Set a bomb near the electric gate, then ride the spinner straight inbetween the bomb and the gate to boost over

Using a cutscene drop with a pot, you can place a pot on the switch and get the HP chest without the statue. This is a much harder method than above

It is possible to get the boss key early on the way up by getting onto the railing. This can be done in multiple ways. Once you are on the railing you can walk up the railing to the end, line up the hearts as shown in the videos and just hold forward, then you can just clawshot up and spinner around to the door.

The angle is very mildly precise. Either of the 2 Moon Boots frames will work.

Get a slight angle and backslice as shown.

Stand on the fourth step at the end and line up your first heart slightly to the left of the pillar, then go to the other end of the step and jump attack

Stand on the fifth step and target as shown so the boomerang takes longer to get from target to target, this will give you time to LJA

Get past electric barrier LJA

For the barrier in the room with the rolling spikes you don't have to place a statue to keep the barrier down. Just stand on the pressure plate and target high on the stairs, you can then just LJA past the barrier before it comes online again

Get past electric barrier with clawshot

By using the clawshot on a ceiling target, you can drop and jumpslash to land on the fence. With a few hops you can just jump over the barrier. Useful for Bug Limit

On the way down for the first bell you can skip placing a statue on the pressure plate. This is done by increasing the distance the Dominion Rod can be used with a backhop

It is possible to skip the scale puzzle both on the way up and way down. On the way up after doing Boss Key Early simply jump past the scales. On the way down stand very close behind the statue, line yourself up with the other end and backhop across by mashing A. If you fail you will have to do the puzzle normally.

In the big circle room you never have to turn the platform if done right. First of all you can skip going up a level by controlling the statue through the floor, to do this just aim at the wall in the same place at the video. Next you can make the statue fall all the way to the bottom with backhops, remember to wait for the inside spinner to pass so you have time to get the statue to fall. There are two ways to perform the final part, the fast method is shown in the video where you jump and bonk against the wall, this makes the statue come outside the middle so you can instantly go to the Bell. The other method is to lose control of the statue, jump down and control from there to get it out of the middle

For the poe in the circle room it is possible to gain control of link during his animation of collecting the poe and even transform before wolf link holds the soul up. To do this make the backflip from the finishing blow land on the switch, you can then move and transform before you hold up the soul.

The fastest movement through this room is to gain control of the small statue after the rolling spikes at an angle so you can roll past it but get the statue stuck on the wall. Once you pass over the black square on the floor (about 3 rolls) tap left to release the statue after you to get the right distance between you and the statue, now you can place the statue on the pressure plate to open the gate with you right infront of the gate. L-roll to go through and have the statue void

Although it is slower than using the statue, the last gate before the boss door can be skipped with a bomb boost. To do this place a bomb in the set location and clawshot at the back of the target, if done correctly Link should get knocked on top of the gate.