The intended way to access the Ice Ruins area is to go down Rosso's Ore Mine in Hyrule, which is full of autoscrolling platforms. It is however possible to completely skip going in that cave and instead directly access the portal at the bottom of the mountain. There are a few different methods:

By entering Lorule from the Portal just beside the weather vane at the bottom of Death Mountain and then going east, you will reach a bridge that is supposed to only be crossed with the Hookshot from east to west. It is however possible to cross it from west to east with the help of Tornado Rod and the skull enemy nearby. Use him to push Link slightly into the top or bottom side of the bridge, activate the Tornado Rod and shoot the Hookshot to the right. If done correctly, the Hookshot chain will look glitched and aim directly to the wooden pole, taking Link to the other side of the bridge.


This method is really easy to pull off and is decently fast, making it the most commonly used one.

Discovered By AJC868 And RheaultWnage

By pulling off either an Off A Ledge Fire Boost (Viable) or a Bomb Boost (Much harder) near that same bridge, you can get on top of a ledge and walk over / Hookshot to the other side of the bridge. This method allows you to also skip Hilda's text, by simply walking past the trigger before dropping down from the ledge.

The trigger zone for Hilda's text is pretty big, as seen in the picture below (light blue zone), so make sure you dash all the way off the ledge to avoid it. 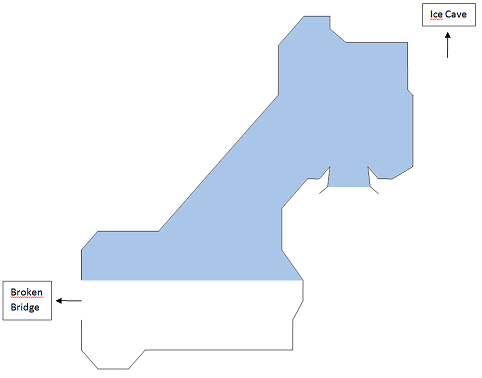 Also, here's a visual cue for where to start the Fire Rod Boost.

By pulling off an Off A Ledge Fire Boost on the bridge, you can get on top of the post above you. Once you're on top, fall down to the rope on the left and Hookshot to the southwest post. Then all you need to do is hookshot the post across the bridge. This method also allows you to skip Hilda's text and is technically the fastest way to skip Rosso's Ore Mine. This is also possible with a Bomb Boost but is a lot harder.

In the area near the entrance of the Ore Mine at the top of Death Mountain in Hyrule (east of the Tower of Hera), you can use an Armos Statue and the Tornado Rod to get on top of the mountain ledge. You can then dash to the left screen, have Link fall into the void and respawn (or use the Tornado Rod right after the screen transition) on a similar ledge on that new screen. From there, you can simply jump down and fall all the way down the mountain.

Although this Ore Mine skip is slower than the other ones, it can still be used in the 100% category, as it makes it possible to easily access other entrances and key places of the Ore Mine, namely the Premium Milk guy.