From there you can either :

(Both methods are of similar length when performed correctly)

The best way to defeat Stalblind quickly is to use the Hammer. Start by getting as many sword slashes in as you can on the first cycle of the first phase. He will then do his breath attack. Approach him, get hit by the attack and make use of the invicibility frames to smash him once with the Hammer followed by a sword slash. Repeat if necessary to reach the second phase.

The second and third phase are done the same way, by getting close to his body and using the Hammer. If done correctly, each phase takes 2 Hammer attacks to complete. Pay attention to the sound the Hammer makes when it hits Stalblind. If you hear the damage sound effect multiple times for one attack, you'll know you hit him correctly. If you only hear the sound effect once, then you didn't hit him correctly and will have to add extra attacks to complete the phase.

If he does his spin attack during the second or third phase, take damage and hit him while you are still invincible.

Skip Merging in the B1 Western Room

By using the Bow diagonally, you can skip having to merge to get past the bars that rise. Saves a small amount of time if you already have the Bow equipped. 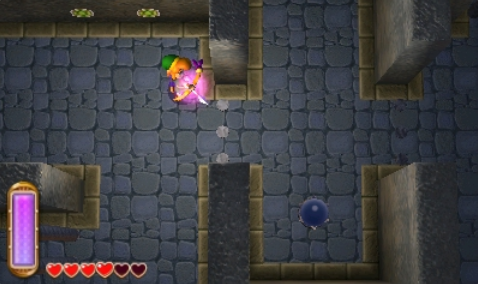 Clipping Through B1 Floor

By using the Gargoyle Statues and the switch to raise the bars in the western room of B1, it is possible to clip through the floor and land in the room beneath it, in B2. To do so, any of the 3 sets of bars can be used.

When the bomb explodes, the first statue will rise with the bars, slide on top of the second one and then fall on Link's head, who will be pushed down to the lower floor. It is possible to pull the second statue while the first one is on top of it, and it will follow, making it possible to clip in different places. Nothing useful has been found with that yet.

Simply falling down to that room has no practical use when you want to actually complete the dungeon because, unlike Link, Thief Girl can't pass through blocked doors when backtracking through the dungeon to reach the first room. This means that you still have to complete the Gargoyle Statues puzzle and bomb that one switch that opens a door in B2.

By using the rightmost set of bars to clip, it is possible to land on top of the wall in the room below. To do so, simply make sure Link is in the "northern half" of the statue's right side, so he slides south a bit when grabbing it. 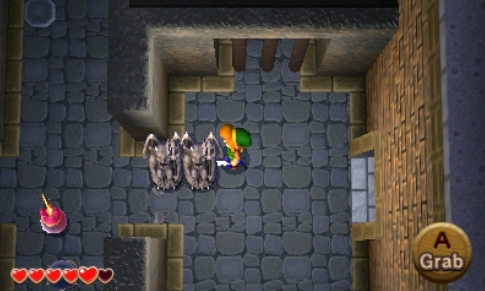 Once you're on the wall, the camera will keep going from B1 to B2. You can reach the north room by simply holding up on the stick until you get the transition. From there, dash left, let a bomb fall down to the switch, dash up and dash right. (When you get close to the right edge of the room, the camera will zoom back out and stop the dash for you, so you don't have to worry about dashing too far right and falling off.) Once you're in the northeast corner of the room and the camera is zoomed out, position Link facing top right, and just a bit under this red line: 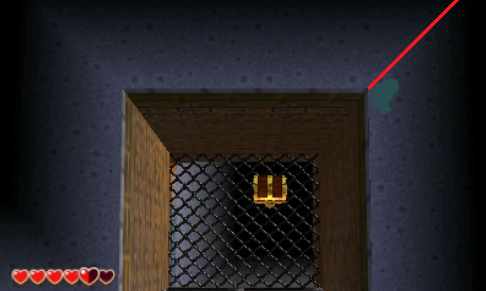 Dash from there and you will reach the entrance to the miniboss room.

NOTE: This whole trick saves about 1 second overall, if at all. Remember that you need to solve the Gargoyle Statues puzzle before doing this trick, or else you will have to do it on the way back.

It is possible to get on top of the B1 walls by using the gargoyle statues (see above) to make your way to the Miniboss room and fall down to the platform with the small key chest required for Thief Girl's door. You can then walk back out of the room and pass through the trigger that normally locks the door and starts the fight. By entering the door at a specific angle (see video below), the trigger can be walked through, thus skipping lighting the torch and fighting the Eyegores to complete the room.

After rescuing Thief Girl from her cell, a cutscene can be skipped that shows the southern door locking and her telling Link they should head through the northern one. This can be done by leading Thief Girl to a specific spot right below the trigger for the cutscene, then "leading" her once again from the other side of the trigger. Doing so will stop the cutscene from happening and will prevent the door from ever closing. This works because the cutscene only plays when Link enters the trigger for it while in the state of "leading" Thief Girl, as with most triggers in the dungeon.

An interesting side effect of doing this skip is that the music will never change to the song that normally plays after the cutscene. 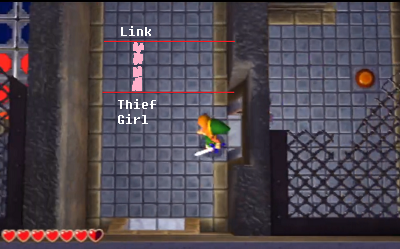 Delay The Spawn Of Enemies In The Master Ore Room

It is possible to avoid the trigger that spawns the blue enemies near the Master Ore chest, giving you movement freedom to go activate the switches and dash to the chest without worrying about Thief Girl getting grabbed. Just walk diagonally without touching the south red wall, and be careful not to let Thief Girl fall on the north side. 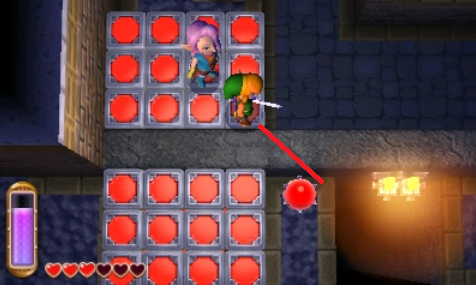 If you went down to get the Master Ore, the enemies will spawn once you get back on the south red wall and hit the switch to raise it, but they won't be a threat by then. However, if you do not go down for the Master Ore and instead directly go to the staircase leading to B2, then it is possible to not spawn the Zazaks at all.

After activating the moving wall used to reach the Big Key Chest, instead of going up the stairs and merging into it, position Link under the rightmost end of its trajectory and use the Tornado Rod right away. If done correctly, Link will fall back down on the piece that links the moving wall to the north wall. From there, simply merge the north wall, walk left to reach and open the Big Key chest. 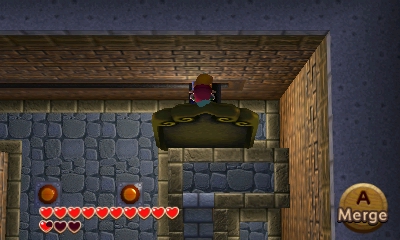 It is possible to get on top of the B1 walls, make your way to the Boss room and fall into the loading zone of the south door to exit the Dungeon. 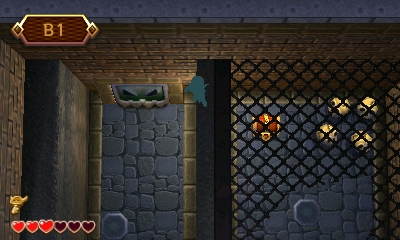 Unfortunately, doing so will not actually beat the dungeon as it is currently not possible to activate the Boss fight without Thief Girl following Link.

Normally, you are not supposed to be able to complete Thieves' Hideout as the last dungeon in Lorule, because rescuing Osfala enables you to rent the Sand Rod, which you would then use to gain access to and beat Desert Palace. But, it is actually possible to skip using the Sand Rod entirely, with the help of a Damage Boost technique and the Desert Palace Skip.

Due to the fact that beating Thieves' Hideout plays the Sage "cutscene" of Osfala giving you the Sand Rod, the regular cutscene for beating the final dungeon (i.e. the Triforce Of Courage stairs rising) will not happen at all, and you'll be able to simply take the usual warp in the center of the room and exit the Sage room faster than you would if you had to climb up to get the Triforce.

Even though you can't see them, the stairs are still present and usable. You can climb them up all the way to the top, but there is nothing there.

Now that it is possible to skip the boss of Desert Palace, it is worth it to skip the Sand Rod, which means Thieves' Hideout can be done last. 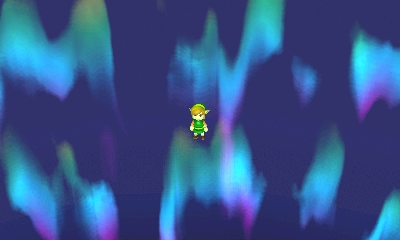