This entire dungeon can be skipped: Desert Palace Skip

This fight is pretty straightforward. Always go back to the central platform between each cycle, so you can create a sand bridge leading directly to his next location.

If you use the Sand Rod immediately before the short cutscene between phases, it may fail to work properly, resulting in only one sand pillar being raised.

During the second phase, it is possible to stand on his platform after he starts charging his beam attack. By doing this, you can keep damaging him without having to worry about your sand bridge disappearing or his beam hitting you, shortening the fight drastically. However, this only works on the first cycle of the second phase - afterwards, you will no longer be able to clip inside him.

You can skip opening the gate in the northeast room on 1F. By using the Sand Rod and Quick Equip Cancelling Link can move himself into the pillar of sand as it forms and get pushed in such a way that he clips directly through the gate.

You can skip revealing the western staircase when coming back to the first room of the dungeon. In order to do so, in the previous room, you need to enter the door while dashing diagonaly towards the south-west, and then walk around the ground switch in the main room. 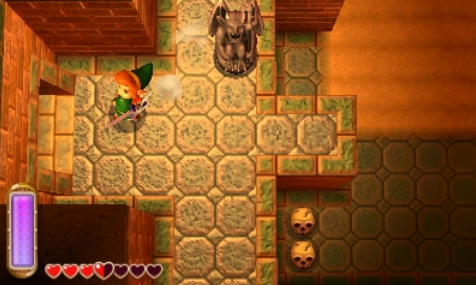 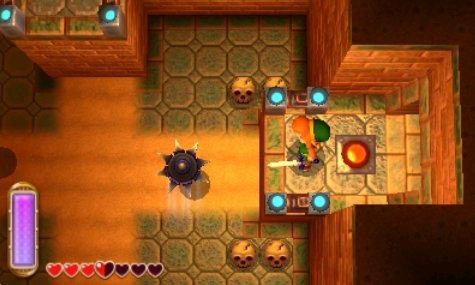 Skip One Merging in the Titan's Mitt Room

Using the Sand Rod in a certain way allows you to directly reach the platform with the ground switch with the use of a single sand wall. When unmerging, Link "jumps" a certain distance in front of the wall, allowing you to effectively land on the platform. 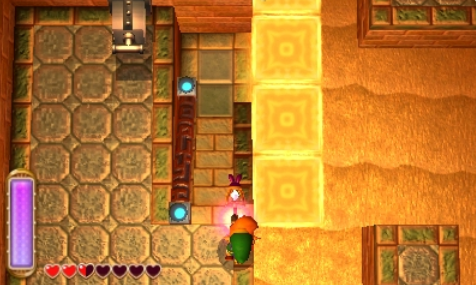 Using the Tornado Rod and a Gargoyle Statue, it is possible to get on top of the wall in the room north-west of the one with the attacking floor. From there, you can navigate the walls in order to reach the one where the staircase to 3F is, and then it is possible to enter the loading zone by charging a spin attack and walking slowly in the north direction.

The spots on top of the wall can be used to get a good visual on where to stand before charging up the Dash-Cancel Momentum. The north-south position doesn't matter, only the east-west one does. 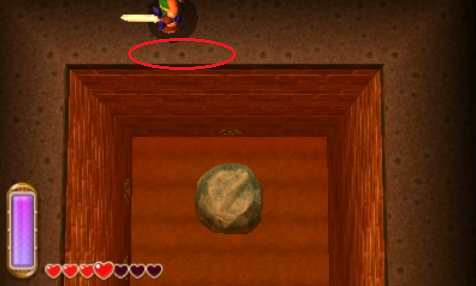 If you do this skip, you will also have to skip the entire 3F, because you won't have the Big Key to open the Boss Door.

Similar to the 2F skip, pulled off in the south room of 3F. It is possible to get on top of the wall in both the north-west and south-west corners. While the first one is a bit faster, the second one is much easier to achieve. Dash-Cancel Momentum is once again required in order to move from one room to another while standing on top of the walls. Visuals are a bit harder to find this time around. 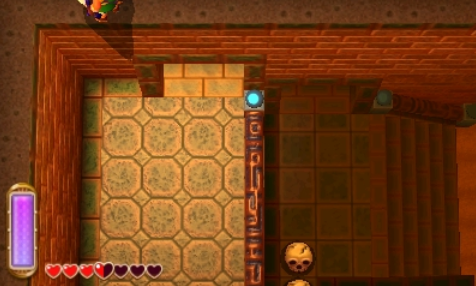 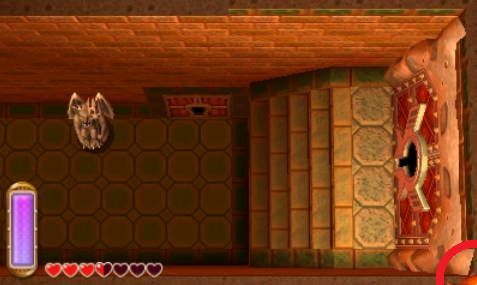 If you do not manage to do the last Dash-Cancel properly, Link will fall too close to the Boss Door in the next room, and walk back into the west one because the door is actually only locked on one side.

The first room change can also be done with a north dash slide. Buffer a Dash-Cancel anywhere between the second and third picture below. 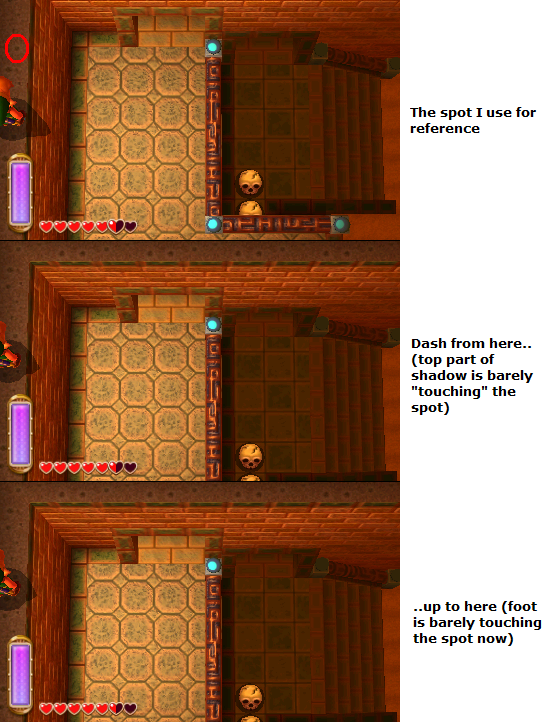 With the help of a Gimos, you can Tornado Rod and land on the platform where the Big Key chest is without having to raise the sand level in 2F. You'll want to stand in the corner southeast of the platform and have the Gimos coming at you from the southwest. Like other similar tricks, take damage from it and then use the Tornado Rod when he's on top of you again, before your invincibility wears off. The timing for the trick isn't strict at all. 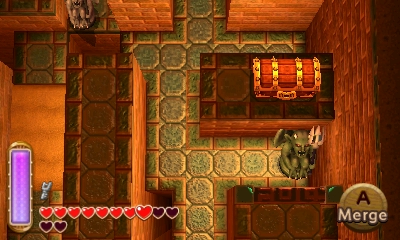 You'll also want to get the Small Key chest in the southeast corner of the room. You can get it quickly by placing two bombs near the red/blue switch, instead of raising the sand to move the Gimos statue. Just wait a split second between the first and second bomb to give you enough time to walk from the red to the blue wall before the second bomb explodes. 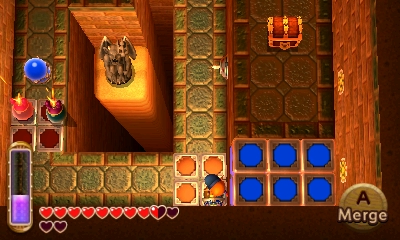 There are 2 ways of doing this.

Without raising the sand level

This is the faster, but also harder method. It involves using a Gimos Statue to Tornado Rod on the stairs leading to the Big Door. The timing is pretty strict, but can be pulled off with some consistency. You'll want to use the bottom corner, have the Gimos coming at you at an approximately 45° angle and Tornado Rod as late as possible. 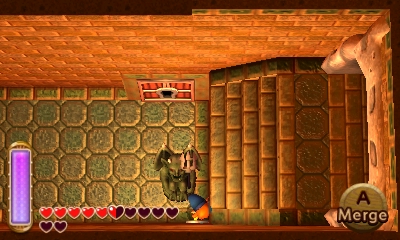 This method is slightly slower than the previous one, because it requires you to pull a lever and watch the sand rising, but it is way easier, in case you don't feel comfortable doing the other one. Have the Gimos coming at you from the southeast. 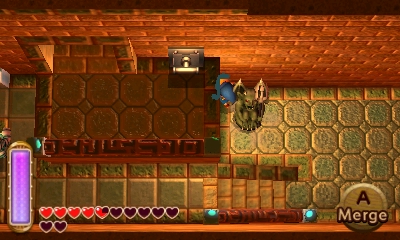 After raising the sand, simply dash across the room to reach the Big Door.