Route Inside the Dungeon

In Any% or All Dungeons No OoB

The only available attack item is the Level 1 or 2 Master Sword, which should be used as the primary method of attack. The bow can also be used as a long range weapon, while the tornado rod is good for avoiding several of Yuganon's attacks, since you have no shield. In the first phase, the strategy is to hit Yuganon as many times as possible while avoiding every attack. With only green mail and 12 hearts, Yuganon can kill you in as little as 3 hits, so avoiding attacks is more important than making attacks.

In the second phase, Yuganon will only use two attacks. He will use an orb attack when not merged into the wall; deflect the orb 6 times like a tennis match until it hits Yuganon. Yuganon will then merge into the wall. Use the Bow of Light to stun Yuganon on both sides, and then hit him with your sword until he disappears. Avoid the fire on the walls and fairies, merging on the wall in a corner if you need to. The second tennis requires 7 hits, then stun Yuganon with the Bow of Light again by getting behind him and hitting him from behind, then continue to hit with the sword. On the final tennis, you can simply mash your sword and it will deflect both orbs every time. Snipe Yuganon from behind with the Bow of Light, then hit him with your sword on more time to finish him off.

100% runs can take advantage of the Super Lamp, Hylian Shield, Level 3 Master Sword, and Great Spin to do the fight much more effectively. In the first phase, use the Hylian Shield to block all attacks, using the Super Lamp to damage Yuganon between attacks.

In the second phase, tennis and stunning Yuganon with the Bow of Light are the same, but when hitting him with the sword, by doing 1 slash followed by 2 great spins, the fight will be finished in 2 cycles instead of the usual 3.

By using the Big Rock and the raisable wall just west of the the Big Bomb in the Bomb Trial, it is possible to perform a Recoil Jump into a Bomb Boost to get on top of the walls. 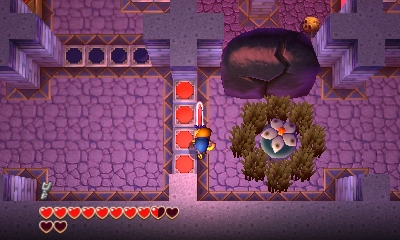 If done correctly, Link will Recoil Jump and immediately get hit by the explosion, which will boost him south on top of the wall. From there simply walk east until you reach this position. 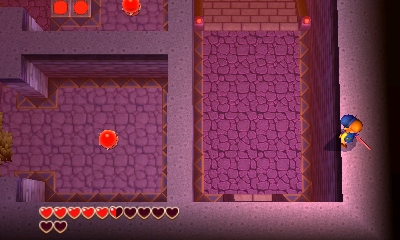 NOTE: If you hit the Big Bomb and it explodes in its original location, it will destroy the Big Rock and you will not be able to pull this trick off anymore. Be very careful when using items around the Big Bomb, or lure it west of the wall you're using to perform the trick so its far away from the Big Rock.

Trials Skip can also be performed using the nearby Bomb Flower. This is considered easier than with regular Bombs, but more difficult than with Nice Bombs, and comes with a more complicated setup.

If you did everything correctly, Link's second sword slash will hit the large boulder and push him back, causing him to do a recoil jump off the edge of the wall and immediately get hit by the Bomb Flower's explosion, knocking him out of bounds.

Take great care not to accidently detonate the Bomb Flower prematurely. The Bomb Flower will do 3 Hearts of damage to Link wearing the green tunic.

This skip requires a Bombrod to be pulled off using the Nice Bombs, so it is only possible in a 100% run. Right before the entrance to the Ball & Chain Soldier room, there are two Gargoyle Statues. Push the left one right until both statues are right beside each other. Throw a Nice Bomb on top of them and Bombrod from that position to clip in the floor above.

In the first room in Lorule Castle, it is possible to dash onto the railing next to the staircase to grab the small key early.

There is a skull at the top of the staircase that is right up against the railing. Have Link stand above it but make sure he is still touching the skull. Then face southeast and dash. Link should get on top of the railing once he reaches the 3rd step so make sure to stop your dash there. If you don't, you'll fly past the railing and land in the lava.

Once atop the railing, carefully walk over to the chest and grab the small key.

If you push the Gargoyle Statue on 3F and dash north from the place it was standing, you can land directly on the chest containing the small key. Standing on it's corner lets you open it, after which you can dash right, straight the lava, and respawn all the way up on 3F. While fast, this method is slightly slower than the one above. 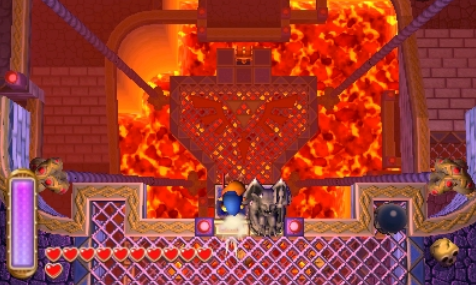 While waiting for your first bomb to activate the swith and raise the blue wall you're standing on, you can time and prepare a second bomb, that you will throw at the same switch before heading down to the south-west red wall. If you timed the second bomb correctly, you can make it to the wall before it goes up, saving a small amount of time over having to use the other switch. 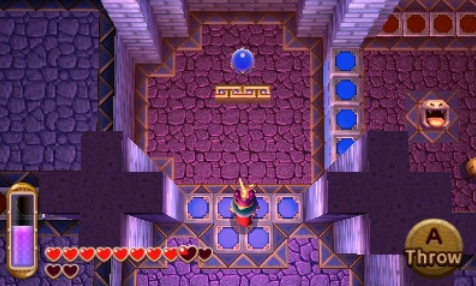 After going up using that red wall, you can aim an arrow at the switch to the east, let it go and walk past the blue wall before it goes up, giving you direct access to the Big Bomb. Use the tip of the arrow and the triangles on the floor as a visual to aim your shot. 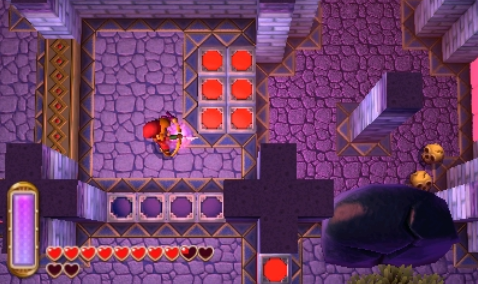 The eyeballs in the Hookshot trials are initially standing on cracked tiles, which you are supposed to break with the help of the Wallmaster. Using the Tornado Rod while standing under those tiles will cause them to break instantly, preventing you from having to wait for the Wallmaster to get close.

The Eyeball Duplication Trick is used to complete this trial faster.

By using the Tornado Rod and a falling boulder just west of the small key chest, it is possible to get on the ledge of the platform. If you place the Gargoyle Statue in a certain spot before getting on the ledge, you can trap a boulder in the corner. With a well placed spin attack, it is then possible to recoil off the boulder, jump towards the chest and either land on it or open it while Link is in the air. (i.e. a Recoil Jump) 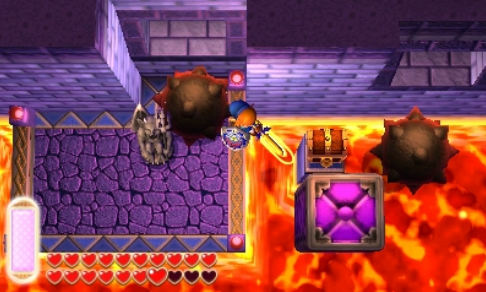 If you get trapped in the corner by the boulder, simply tap the stick north-east and swing your sword.