NOTE: This route requires you to perform the Big Key skip

It takes a total of 5 hits with the Ice Rod to beat his first phase. After every 2 hits, he will do his geyser attack, which can be stopped by using the Ice Rod on the geyser itself. (You must wait a short time before doing so, because the Ice Rod will not stop the geyser if used too early.)

In the second phase, Grinexx will choose randomly between his 3 attacks: Headbutt, Explosion, Spin. The headbutt is the ideal one, as it allows you to keep dealing him damage. The explosion requires you to move away from the radius, but lets you charge a spin attack that you can unleash when his head comes back out. The spin attack is shorter if he hits you with it, so the best thing to do is to run at him, and then charge a spin attack while waiting for his head.

By using the Ice Rod to form a platform under the bridge at the south of the room, you can line yourself up under the railing and use the bombrod technique to get on top of the railing. This skips the majority of the dungeon, including any keys or the Big Key. This trick is frame perfect.

A good way to get the Big Key skip consistently is by placing a Bomb once the first spike bar touches the left wall and then T-Rodding once it reaches the first jagged line on the left side (pictured below). 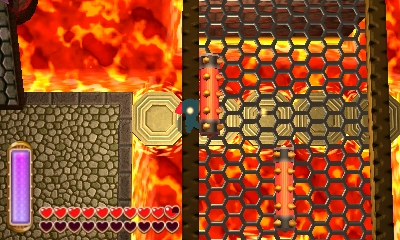 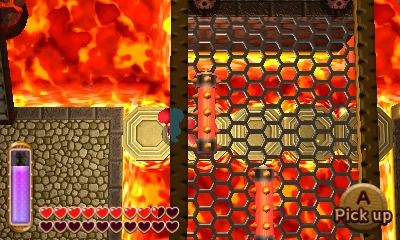 It is possible to keep all momentum during a dash on the second seesaw in 1F. To do this, stand a little bit over the ledge to the point where only Link's left arm is off (pictured below). Dash towards the seesaw and Dash Slide when you get to the top of it. You will slide down the seesaw and over the left lava boulder, ending up at the end of the seesaw. 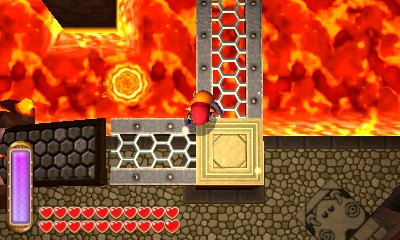 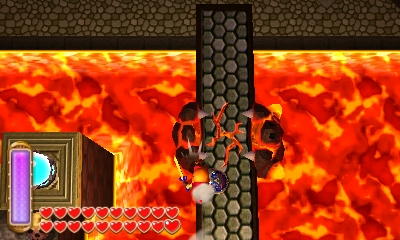 By QE-Cancelling your Ice Rod use on the left seesaw, it's possible to get past the Guruguru bar in it's 1st cycle. Doing this saves 2-3 seconds over simply waiting.

By performing a Bombrod under the railing (pictured below), then another under the boss keys platform railing, you'll clip through both. This skips one small key and one climb. The timing for this is different than most Bombrods because you are so close to the platform above you.

The best way to perform these clips is by waiting until the very last second to use the Tornado Rod. 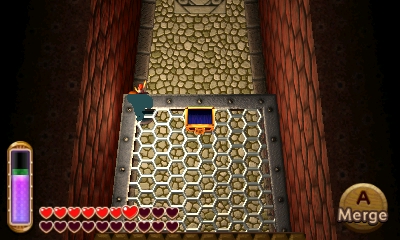 With the help of the Ice Rod, you can make your way to the "lavafall" on the east wall of the main B1 room. From there, a switch can be hit by shooting arrow in the south-west direction, which raises a bridge that leads to the south portion of the room. Quickly jump in the lava after hitting the switch to be able to use bridge before it goes back down.

The safest way to perform this trick is to get as close to the east wall as you can, and just make your "solidified lava" bridge going straight down all the way to the lavafall. There, charge your bow while facing the appropriate direction and take damage from the lavafall. Charge another shot, use your temporary invincibility to go as far right as possible and release the arrow. Jump south into the lava and take the raised bridge.

In the south room of B1, the switch can be hit using the Ice Rod, which saves having to wait for a bomb to explode. 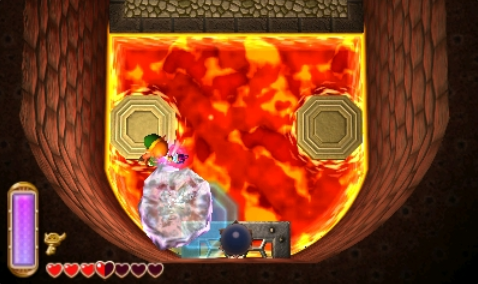