This is a complete dungeon skip that uses multiple glitches.

Perform an Ice Rod Clip below the bridge south of the portal attached to the boss arena in Misery Mire. Have Link place an iceberg on the right side of the bridge and then Ice Rod Clip into the northern wall. It is very easy to fall into the void, so stop moving Link once you think he is about to clip into the wall. Once inside, Tornado Rod to the platform above him.

Then head south past the bridge to the next platform with the open ledge. Once there, perform a Fire Rod Boost off of the ledge to get boosted up onto the southern wall.

After performing the skip and getting all the way near the north of the arena, get into this position and Dash Slide to the right. 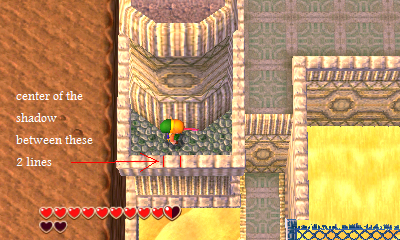 If done correctly, Link will slide over the gap between the tower and the area with the sand. He will then fall through the sand and land where the Heart Container and Irene Portrait are. There, you can simply grab the Heart and/or touch the portrait.

Alternatively you can trigger the Zaganaga fight as normal by walking along the wall near the portal north of the boss arena. The trigger for the fight to start is around the portal. Dropping down into the arena will then start the fight. An effect of doing this is that Zaganaga will not make any sound during the fight.

This method is slower to reach Irene's Portrait and is more difficult to pull off than the above method. It is even harder if you don't have the Nice Bombs. The damage boosts are performed near the first portal you come out when you enter the Misery Mire area.

Portal Clipping is an old and much more difficult means of skipping the dungeon, performed at one of the two south-west portals. You want to be standing still immediately after getting inside the portal. From that point, Link will be standing on a thin "line", no more than a few pixels wide. In order to perform the rest of the skip and get on top of the wall, you will first have to walk north a certain distance without falling off either side of the line. There are a few ways to do so.

With Link facing south, put down a bomb, pick it back up and throw it at the last moment before it explodes. If done correctly, the explosion should push Link north a certain distance without him falling down. Perform this twice and you will be far enough to get on top of the wall. The timing for the bomb can be hard to get down and master, but this method can be pretty fast.

Two decent setups have been found to help with the timing. The first one is to place a bomb, use the Lantern 5 times then pick up the bomb and throw it. (It might be slightly too fast depending on your button mashing.) The second one relies on the pulse of your hearts at the bottom left of the screen. Put a bomb down at the start of a pulse, then count 3.5 pulses (pick up the bomb while counting) and throw it. The exact timing might be slightly more than 3.5 pulses, but it is a good estimate.

It is possible, although VERY HARD, to simply walk straight up without falling off. You have basically no visuals to guide you, and the 3DS control stick can make it hard to go directly up. It is however possible to do, and if done perfectly, is the fastest method to get far enough into the wall.

Although this isn't really a complete method in itself, it can help accelerate the process of walking far enough into the wall. The idea is to remain close to the portal (having Link's hair appear outside of it while facing south seems ideal) after clipping in and wait for the stun effect to wear off the Moblin. At that moment, or once he starts moving, the Moblin might damage Link and boost him north a bit. From there, you can move further using any of the previous methods. (Bomb Back-Boosting will then require only a single boost instead of two.) It can be seen in the Bomb Back-Boosting video. Keep in mind that the Moblin might boost Link incorrectly depending on it's position in front of the portal, resulting in Link falling into the void.

After getting Moblin boosted properly, it is possible to perform a Bomb Back-Boost that doesn't require timing the throw. Let's say there are two ways of throwing a Bomb. The first one is to put it down, pick it up, wait a bit while holding it and then throw it. The second one is to put it down, pick it up and throw it immediately by mashing the A button. Depending on the method used, the Bomb seems to behave differently when Link is inside the wall for some reason. (Potentially due to the "ceiling" of the inside wall.) By getting boosted by the Moblin, Link will be at a certain distance behind the wall. If a Bomb is thrown using the second method (mashing A to throw immediately), it will just barely pop out of the Portal before sliding down to the bottom of it. Then, when it explodes, Link will get boosted due to him standing at the perfect distance from it.

This method can potentially fail if the Moblin doesn't boost Link straight up. If Link gets boosted slightly to the side (even if he doesn't fall down), then the explosion from the Bomb will boost him further to the side and knock him off. Also, if Link isn't far enough into the wall after the Moblin boost, there will be no difference between the two types of Bomb throws, making it impossible to use this one method. If that happens, simply use one of the timing setups mentionned earlier.

By facing north and charging the Ice Rod, you can use the block's shadow as a mark to gauge the left-right position of Link inside the wall. While standing on the line, the mark can either be left or right depending on the position of Link. From there, slowly tap either up/SLIGHTLY left or up/SLIGHTLY right so the mark goes from right to left, then back to right and so on. There seems to be more space on the right side than on the left, but it is still easy to fall off either one.

You want to keep going until the mark has moved two places north, and then a little bit more .

Getting On Top Of The Wall

Even once you're deep enough into the Portal, simply using the Tornado Rod won't be enough to get Link on top of the wall, but will instead result with him getting blocked by a "ceiling" and fall back on the walkable line. What you want to do is to tap a direction (usually either left, down-left or top-left, whichever one you prefer) and use the Tornado Rod at the same time. If done correctly, Link will clip through and land on top of the wall. (If not done correctly, he will either fall down into the void or back on the walkable line.)