Margomill has 3 phases. The first starts off with a single disk with an eye on top, while phase two and three add 2 and 4 more "body disks" underneath this "eye disk" respectively. Body disks have 5 HP. The most common methods to take them out are the following:

You can fall the void surrounding the arena to fully replenish your energy bar, which makes using bombs more viable.

Margomill is the only enemy in the game that does not deal damage directly, and as a result is no harder to beat in Hero Mode since fall damage is not quadrupled.

Once you enter the room, merge onto the first block as quickly as possible. From there, un-merge onto the platform with the chest and merge onto the wall to your right. Un-merge onto the platform north of the switch that activates the fan. Once there, quickly move slightly south past the wall almost to the point of falling off. Once the northern block is getting close, move off the ledge and Tornado Rod. There are 4-5 frames where Link stays at the same height he was at when he left the ledge. This gives just enough time to T-Rod and land on top of the block as it comes around. 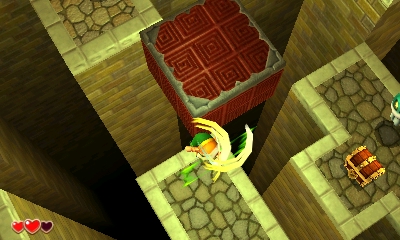 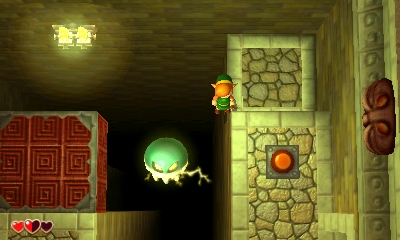 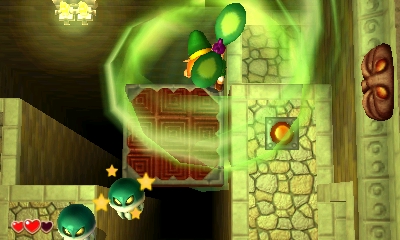 Using the Tornado Rod, you can get on top of the first moving block in the western room of 1F rather than merging with the block. This is slightly slower than the above method but more reliable. 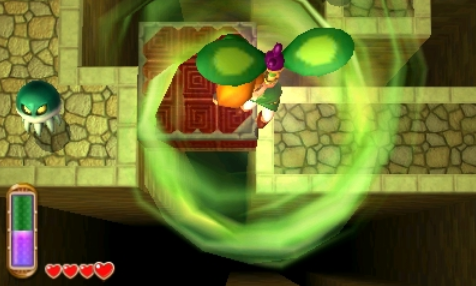 When activating the fan that will take you from 1F to 2F, you can use the animation downtime to travel in the south-north wind tunnel with the help of a bomb, thus saving time. To do so, throw a bomb near the switch that activates the big fan, then step on the other switch near the west wall to activate the other fan and quickly go near the south-north wind tunnel and use the Tornado Rod. 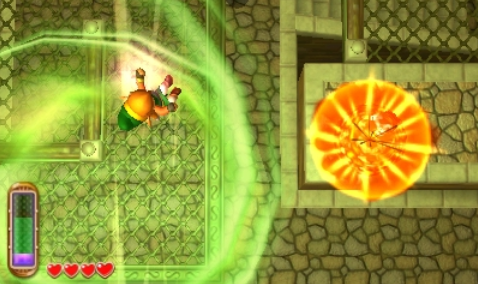 The first small key in 2F can be quickly obtained using either the Hookshot or the Tornado Rod. 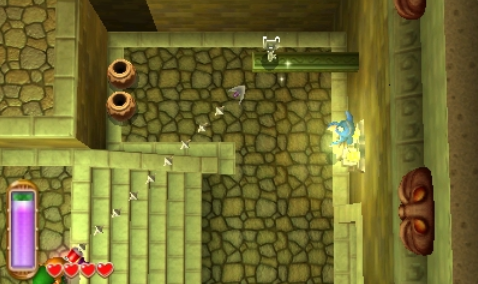 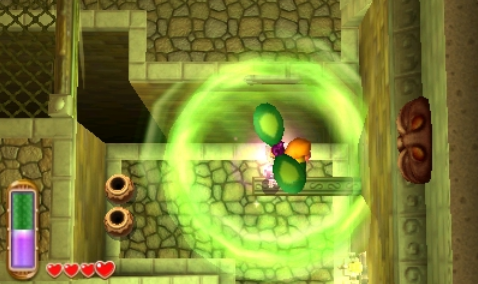 Skip the majority of 2F

It is possible to active the loading zone above the fan in 2F by performing what essentially would be a Bombrod, but by using a Keese to damage Link instead of a bomb. By manipulating the position of the Keese by using the Tornado Rod, you can have it land on top of the cage above the fan, hanging off just enough to be hit by it. You can then use the Tornado Rod again to get a damage boost from it's body, which will trigger the loading zone to the third floor without activating the fan. This is slightly faster than using the precise dash slide seen below.

This trick is very precise, most likely pixel-perfect on the horizontal position of Link, and a few pixel wide on his vertical position. Using a Dash Slide, it is possible to cross over a gap in the eastern room of 2F and access directly the switch that turns on the fan elevator taking you from 2F to 3F. After getting both the first 2F small key and the Big Key, head back in the eastern room and position yourself as follow and Dash Slide north: 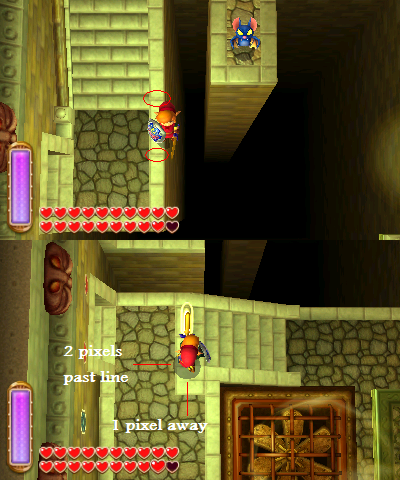 If done correctly, Link will smoothly cross over the gap. From there, simply Bomb the switch, Dash Slide back to the south area (Or use the door on the left, then on the right.) and take the fan up.

After grabbing the Big Key out on the balcony, fire spawns around the chest and normally requires the Tornado Rod to put it out. But it can actually be passed by two methods. The first method is the fastest and easiest way to do it. The way it's done is by allowing yourself to be hit by one of the flames so you can walk past them.

The second method is done by merging on the wall north of the chest and walking by the fire. This method is slower and should only be done if you are low on hearts. 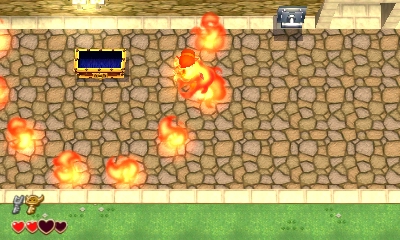 Discovered By CloudMax, Refined By Parax0

It's possible to skip unlocking the door on 2F, allowing you to save the key you would get earlier for a door on 3F. This is achieved by luring an Armos statue in the room with the Boss Key over to the platform on the west side, and using the Tornado Rod just as it hits you mid air, pushing you onto the platform. A consistent way to set the trick up is to merge the wall behind the Big Key chest, and align the "broken" part of Link's hat with the stones in the wall (where they change color). 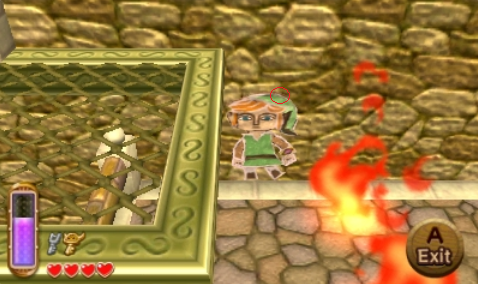 Then wait until the Armos is as far left as it can go (you'll see it stop moving horizontally), unmerge from the wall and use the Tornado Rod when the Armos Statue is at the peak of its jump.

Aside from the South-to-North one that allows you to skip most of 2F, the Dash Slide technique can be used in two other places in the House Of Gales. The first is after doing the above mentionned one and activating the fan that takes you from 2F to 3F. Align yourself with the horizontal lines near the edge, start charging a dash and hold up on the stick as it is charging. Release the stick after Link has crossed the gap. 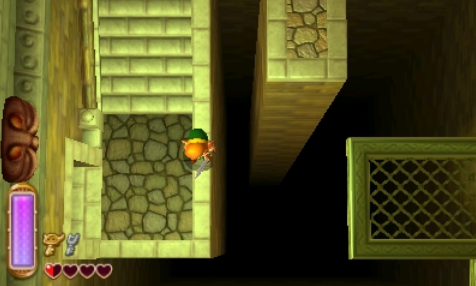 The second place is in the boss door room. Stay still after entering the room, wait until the first platform reaches it's southeast position, then charge a dash and hold down as it is charging. Link will end up directly on the second platform.

If you Tornado Rod in the right area immediately after killing Margomill, you can land on the metal platform that slides back into place after the boss fight. Normally there is no exit from the boss room, but this allows you to leave and re-enter. This has the same effect as leaving the boss room and re-entering in Tower of Hera: the pendant will spawn immediately, instead of having to pick up the Heart Container and/or watch the spawning animation.