Using the Hookshot and slashing (3 slashes with regular Master Sword, 2 with Tempered or above) all eyes is pretty straighforward and takes care of the first phase. You want to keep a certain distance between you and Arrghus, so when he starts moving you still have time to finish off the eye you're attacking before he grabs it back.

The fastest way to kill the second phase is to get close, slash him twice and then immediately use the Ice Rod to hit him while he's in the air. If combo'd well, you can take him down before he starts firing with his eye. If you're not using the Ice Rod, simply get close, hit him twice, avoid his jump attack and repeat.

NOTE: This is easily the hardest trick to perform in the game and is only recommended to be performed in a TAS. Attempting this trick in a run is ill-advised.

Using Ice Rod Clipping, it is actually possible to skip Arrghus, the boss of Swamp Palace.

The first step to the skip is done by performing an IRC in the room outside of the boss room doors. You must IRC into the wall right below the doors you first use to enter the room. Once out of bounds, swim to the southeast room with all the water raising switches and raise the water to the second level. Once the water is raised, perform another IRC into the northern wall by placing an ice block next to the door.

Once out of bounds again, swim north into the next room above you. Keep swimming up until you get to the area with the switch that raises up a piece of the floor. Link will be able to jump onto floor that is OoB, which will then allow him to Tornado Rod up on top of the wall. Once up there, go left to enter the boss room. From there, walk north so that Link enters the room with Gigabari. He will fall through the wall again and land back into the water.

You then must line Link up in a pixel perfect angle and spot so that he can swim south into the door with the painting. The angle and spot is very difficult and precise to get and is the only way this skip can be achieved. If performed incorrectly, Link will end up falling into void. There is currently no setup for this trick to make it viable in an actual run.

Using Animation Storage it's possible to get on top of the water controls and raise the water faster. While on the controls, aim the Hookshot forward and move Link backwards, releasing as you fall. With good timing Link will latch onto the water controls and simply hang over the water. Depending on your positioning the direction you will then need to pull will change, ranging from down to right.

Use your sword to damage him. When he electrifies himself, shoot an arrow to make him vulnerable again. When he explodes into smaller enemies, run into the closest, use your invincibility to get into the circle and kill them all with your sword (multiple slashes, or a spin attack if you manage to charge one) as soon as they become vulnerable.

In the far left room on the first floor, it is possible to Ice Rod Clip near the top of the room, and then jump out of the out of bounds water into the wall underneath the switch. Hitting that switch early and then clipping out of bounds with the Ice Rod again will allow you to jump onto the new platform, which extends out of bounds, and then Tornado Rod up to the outer wall of the room. From there, you can navigate to the boss room, skipping most of the dungeon.

It has been deemed impossible to skip the boss, because the ceiling of the room north of the boss room covers the loading zone for the post-boss room.

The boss key is located on a platform in the room directly north of where you enter the dungeon. You can reach the platform by simply using the Pegasus Boots to dash onto either the right or the left corner, then put out the flames surrounding the chest with either the Ice Wand or the Tornado Rod. Obtaining the Boss Key early saves having to change the water level twice at the end of the dungeon.

It is possible to use the Dash-Cancel Momentum to reach the ground on the right side of the room without falling into the water. Use the fire spots on the ground as a visual to know where to stand before charging the dash. 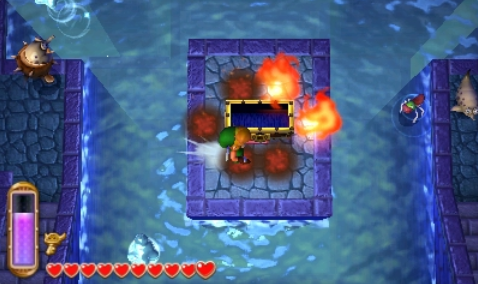 With a well placed Dash Slide in the western room of B1, it is possible to early access a later portion of B1. The most common method used to align Link is a charged spin attack.

Both positions will work. The one in the right picture seems easier to setup due to the good visual cues given by Link's shadow, and also because some weird force at the top of the stairs will keep pushing Link when trying to align in the position of the left picture.

Dash Sliding from there will make Link cross over the gap and end up on the blue bridge. If, before pulling off this trick, you got the very first small key in the eastern room of B1, you will have one left over after unlocking the door at the end of this bridge. This will allow you to raise the water in the next room and go directly to the second miniboss fight (Gyorms), effectively skipping most of the Palace, including the Gigabari fight.

In the north most room on floor B1 there is a puzzle in which you are suppose to activate various crystal switches that will eventually allow you to enter the staircase at the north end of the room. You can shoot the last crystal (located in the south west corner of the room) with the bow by standing on the staircase along the south wall. Position yourself so that Link's foot is roughly aligned with the leftmost part of the bottom step, and about halfway off of the "railing". 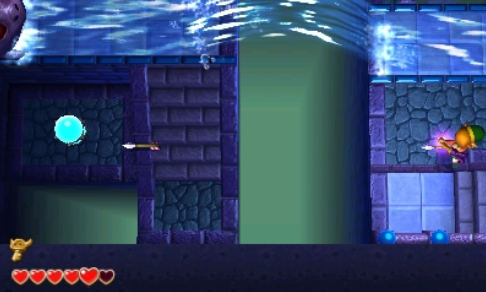 On floor B1 there are two locked doors that lead into the B1 water changing switch room, the room located south of the center room on that floor. If you unlock only one of the doors, you can always return to the room through the door you unlocked, allowing you to skip a key.

In the south-east most room on floor B1 you can skip the miniboss fight completely with the Pegasus Boots. You can do this the safe way or the faster way. The safe way is positioning yourself so that Link slips besides the railings with a simple dash. The faster way is slashing against the northwest wall, just above the door. Then turn around and use a dashslide to get across.

However, if you fail the safe method as described above, there is a very easy back-up strategy which uses the Dashslide technique. Position yourself south of the hookshot pole and look south. Then hold up on the stick to slide over the gap. This is also possible to the east; slash the pole once and charge up a dashslide to the east.