After beating Eastern Palace, a few locations on the Overworld will trigger the cutscene where Irene gives her Bell to Link if you pass through them. Those locations (there are 4 of them) are placed in specific spots as to prevent the player from progressing without triggering the Bell cutscene during normal gameplay.

However, two methods allowing to skip those triggers were discovered, making it possible to beat the entire game without obtaining the Bell. The first one requires Flippers Early, while the other (See Road Skip section below) requires to get on top of a ledge / small rocks near Hyrule Castle using a Green Soldier and the Tornado Rod. (After which you go trigger the Shady Guy's cutscene near Zora Domain, then deathwarp or perform a bomb boost to get on the ledge as shown in the second picture to get back to Link's House without triggering Irene. Buy the Smooth Gem and rent items again if necessary, skip the rocks a second time and proceed to obtain the Flippers.) 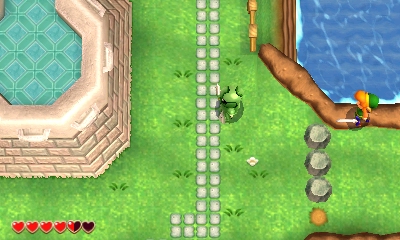 After that, it's all about moving around the overworld accordingly to continue avoiding the triggers until the end of the game. The triggers are only present in the Hyrule overworld, and not the Lorule one. 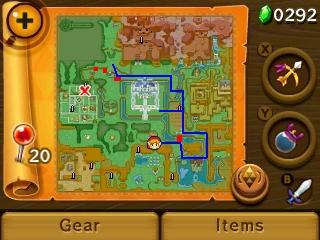 The red blocks represent the places where the cutscene will trigger. The blue lines represent the paths that you can take to go from Link's House / Hyrule Castle to the entrance of Lost Woods / Death Mountain.

In order to get on top of the ledge and get past the small rocks, you will want to lure the Green Soldier and have him coming at you from bottom / bottom left. Similarly to regular skips involving Tornado Rod Lifting, let him damage you once, wait until he gets close again and use the Tornado Rod before your invincibility wears off. At that point, you should be stuck in the little corner with the Green Soldier stunned just left of Link. 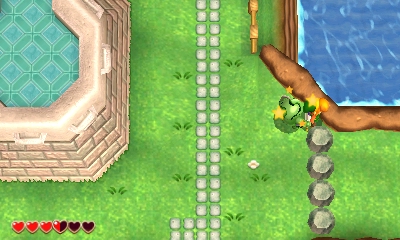 If you try to walk right or bottom right, you will notice some weird shaking behavior from Link. What you want to do is wait until the last moment before the Green Soldier starts moving again and use the Tornado Rod. If done correctly, Link will use the item but get hit immediately by the soldier and fall back down on the ledge. The timing is pretty precise, and if it wasn't right, Link might fall back down in the corner instead.