Link can perform a spin attack to hit the crystal switch while standing on the red pegs and reach the higher ground more quickly.

By performing a Bombrod on 3F, it is possible to get inside the walls of the dungeon and make your way up all the way to 9F (though it is more efficient to clip back inbounds on 6F), skipping both platform rides and the miniboss room. A good position to perform the Bombrod is right of the north wall switch. 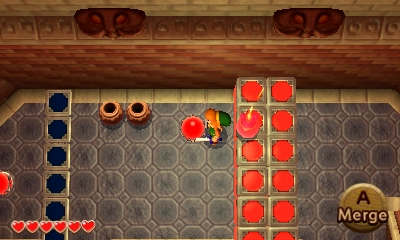 It is possible to skip almost the entirety of 4F and 5F, including the platform ride, by performing an easier version of the Bombrod. To do so, you will need to get hit by a Crow while at the top height of a Tornado Rod use. First, you will need to lure a Crow to the correct spot:

The Hammer is the fastest way to defeat a Stalfos, as it will kill it with a single blow. By running past them when first entering the room, there is a chance they will group up enough for you to be able to kill more than one per attack. 2 or 3 uses of the Hammer are usually enough to clear the room.

By performing a Bombrod on 7F, it is possible to clip into 8F and skip one Small Key and a few platform rides.

Once in 8F, step into the warp and you'll be taken to 9F to fight the Flying Tiles like normal. This is one of the hardest Bombrods in the game to perform and is not done in normal speedruns due to it's difficulty. 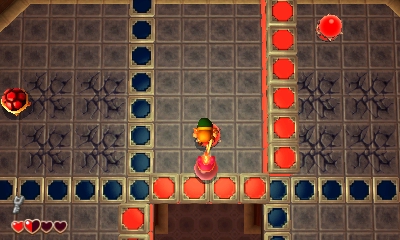 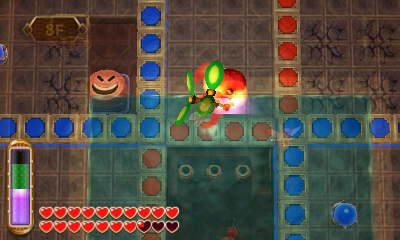 The 10F room can be completed faster by efficiently using the bow to activate some of the switches, instead of walking over to all of them. Some diagonal shots are also possible. 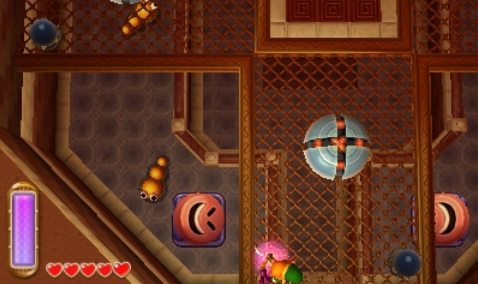 The optimal way to complete it is to stand on the bottom left corner of the elevator as it is going up, shoot an arrow straight north when you reach 10F, move south and perform the diagonal shot seen in the picture above and hit the switch on the right with you sword. You can then make your way near the next elevator and shoot the remaining switch with your bow once you're there.

This way is only optimal if you haven't done the Miniboss Skip. If you've done the skip, then you won't have enough energy / won't be coming from the correct place to do it that way.

By performing a Bombrod on 10F, it is possible to skip hitting all the switches in the room to lower the platform with the Mole. 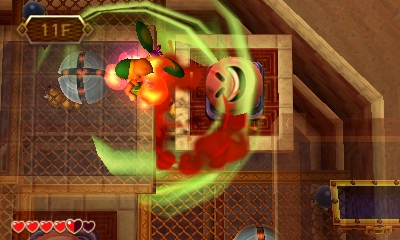 Moldorm only takes damage when hit on the sphere at the tail end of his body, and has a total of 7 HP. The fastest way to defeat him is to use 3 arrow shots and 1 sword slash.

Shoot an arrow first from the position shown below. Moldorm moves randomly, so try to predict where he moves and fire two more arrows. You want to finish with the sword slash because Moldorm will turn red and speed up after taking a certain amount of damage.

Another, slightly easier but slightly slower strategy is to use 1 arrow, 2 spin attacks, and finish with a normal slash. Shoot an arrow first like with 3 arrow strategy, then hit two spin attacks instead of the second and third arrows. Spin attacks are slower overall, but it makes it easier to hit because they have a larger attack range. 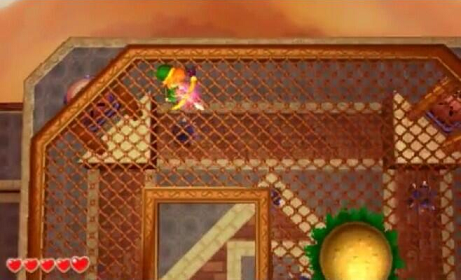 Normally after defeating Moldorm, the Pendant of Power will not spawn until you have either collected the Heart Container or have waited a certain amount of time. These things can be avoided and the animation for spawning the Pendant can be skipped entirely.

This is done by simply falling down to 12F, the floor right below the boss platform. Once there, hammer a Mole and return back to 13F to find that the Pendant of Power will now be spawned.

Beating Tower Of Hera Without Merging

To get past the 1F room, you will have to combine a Recoil Jump with a Bomb Boost. Stand on top of the right raised blue wall, as far as possible in the bottom right corner. Place a Bomb north of where you're standing just before the spiky spinning enemy starts moving north, charge a spin attack facing east and release the spin attack as the bomb is about to explode. 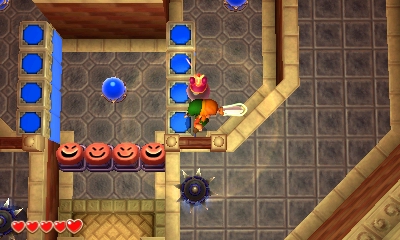 If done correctly, the spin attack will recoil off the spiky enemy, Link will start a jump animation (because he is standing so close to the edge of the wall) and get hit by the bomb explosion, which will boost him south over the small ledge.

Once you reach 3F, use a bomb to activate one of the wall switches to lower the walls surrounding you. From there, perform the Miniboss skip to go from 3F to 9F and avoid all other areas that would require you to merge.