It is possible to pull off a trick that allows you to skip almost the entirety of the dungeon, including the Big Key and the Boss fight. When you first enter the Ice Ruins:

Here is a picture of the position you want to be in before slowly walking right: 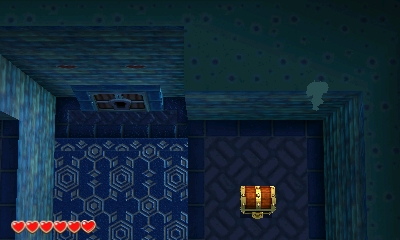 This trick can be quite difficult to pull off, mostly because of the precision required to clip into the floor while on the elevator, and because of the small amount of time you have to turn around and Dash north before you simply clip back inbounds in B1. Pause buffering can help making the clip easier.

Note that it is possible to fall down near the Energy Scroll chest after clipping and getting on top of the wall. Useful in 100%.

Using the Hookshot, it is possible to grab the first Small Key without going off the elevator. To do so, stand on one of the blocks going down and charge your Hookshot facing the southwest direction. Once you reach the correct floor, keep the Hookshot charged and move over to the right to catch the block going up. From there, wait a few moments and release the Hookshot to grab the Small Key. 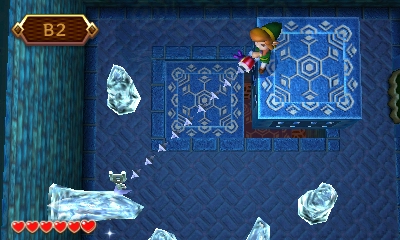 Early Cycle On B3 Elevator

If you use the Hookshot on the switch that activated the elevator in the big ice blocks room on B3, you can get on it before it goes up. 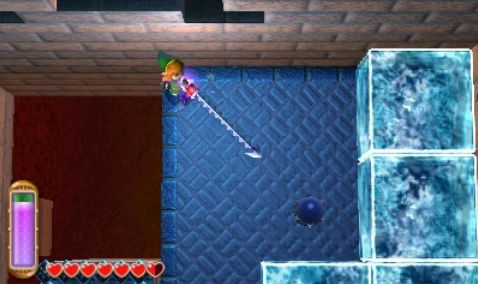 Before starting the fight, it is a good idea to kill the Antifairy, as it deals a good chunk of damage. The 2 most used strategies for this fight involve using either the Tornado Rod or the Bombs. Tornado Rod can be used at the start of the fight to stun all 5 enemies, then quickly kill the small ones and finish with the big.

The room just west of the Miniboss can be hell to get through, due to the icy surface and the bouncy enemies. Using Bombs and/or Tornado Rod can make your life much easier. The Lantern is also a good choice here, as it will push the enemies away without recoil.

NOTE: If you perform the skip correctly, you normally shouldn't have to fight Dharkstare in the "intended way". For All Dungeons No OoB, or in case you accidentally spawn him, here is the strategy used for the fight.

Melting his ice protection takes 3 hits with the Fire Rod. If you have the Green Mail, avoid his triangles attack at all cost, as it deals 4 damage (Touching him does 2, jumping in the void does ½). Know that finishing melting his protection will interrupt that attack. Once the armor is gone, use your sword and sword beams will following him to get as much damage in as possible.

The north chest on floor B2 is the only thing in the game that normally requires the Stamina Scroll to obtain, but this requirement can be skipped by using a variant of the out of bounds trick used to skip the dungeon.