Yuga will start at the opposite end of the boss arena and will merge into the wall if approached. To damage him, you need to either use a ranged weapon, or alternatively stun it and get closer for sword attacks. Yuga can be damaged by Arrows (which you'll typically have in a speedrun), Bombs, or Ice Rod, and can be stunned with both Hookshot and Boomerang.

After damaging Yuga, he'll go to the wall and move away from Link. He emerges if he's around a quarter of the arena away, so he can be manipulated to spawn in predictable positions where you can prepare for the next hits.

For the standard strat using Bow, shoot 2 arrows right after the text before the fight finishes and start moving towards the top. Hit Yuga with 2 more arrows to end phase 1, and stay on the north wall so you can manip Yuga at the start of phase 2. The first cycle of phase 2 is the same process, but after that you'll be short on stamina, so for the last 2 cycles use 1 arrows and then walk to Yuga and slash him twice.

In Low% you'll be using the Hookshot to stun Yuga. The position manipulation is the exact same, but after a stun you can fit in 4 sword slashes in every cycle.

If you have done the Item Rental Early skip, you'll be able to use the Tornado Rod in Eastern Palace. It is possible to get on top of the walls by luring an Armos Statue on the highest platform near the west (which can be accessed by activating the elevator switch) door and then using it to Tornado Rod Lift.

The easiest way to pull off the skip is to have the statue approach you from the north, rather than from the side or diagonally. Also, using your sword to push the statue on the elevator works well. 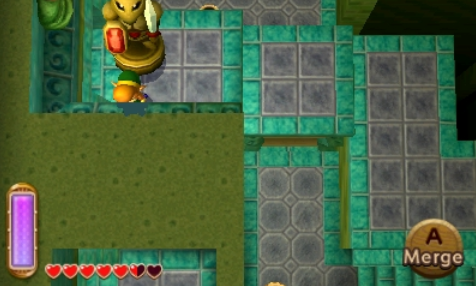 Although the timing is strict, if you don't get pushed out of bounds but still get stuck between the Armos and the wall, you can slowly turn to face north and Tornado Rod again for a guaranteed push.

Once you're on top of the wall, simply walk along it and directly into the boss room loading zone. (No need to walk slowly or anything special.)

You can also use this out of bounds to enter the Boos Key room to the left without spending a key.

By allowing yourself to get hurt by one of the small boulders, you can use your temporary invincibility to walk through the first big boulder that appears. This allows the room to be completed a bit quicker than if you just waited for it to pass you. 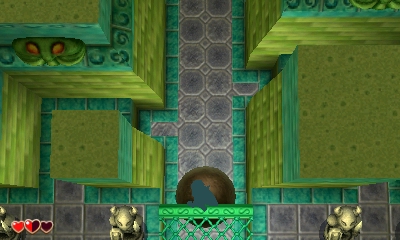 There are a few ways to quickly activate switches in the Boss Door room with diagonal shots and other items.

On the right side of the room, you can hit the left switch (activating the rising platform) while standing roughly in the top right corner of the platform as seen in the picture below, allowing you to stand on it before it rises in the cutscene. The right switch can be hit with another diagonal shot while standing near the eastern door. 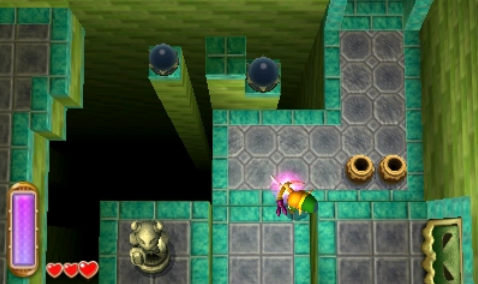 To quickly activate the left rising platform, you can use the Bow from the position shown below. For any other ranged item you need to get closer since they won't travel as far. This shot in particular is essential to the setup for Boss Key Skip. 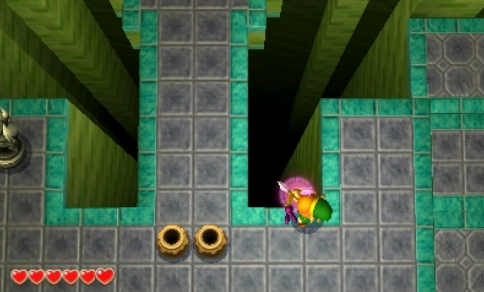 If returning from the Boss Key room and the SW switch, you can hit the switch that rotates the pathwway from this spot: 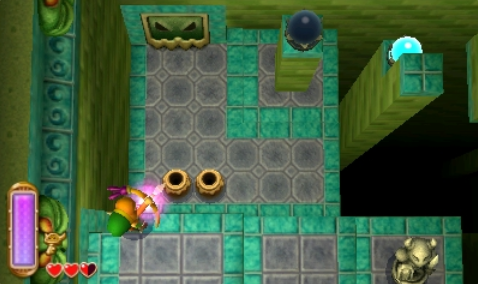 You can also activate this switch without lowering it's barrier using a Bomb:

The SW switch can also be hit using the Ice Rod to reveal the final switch without having to enter the Boss Key room.

After beating Yuga, if you merge on the right hand side of the wall, you will reach an elevated platform with a blue rupee, from where you can drop down diagonally and reach the first 100 rupees chest. From there, you can then merge the wall and follow the green rupees trail to get to the southwest exit to the next area. 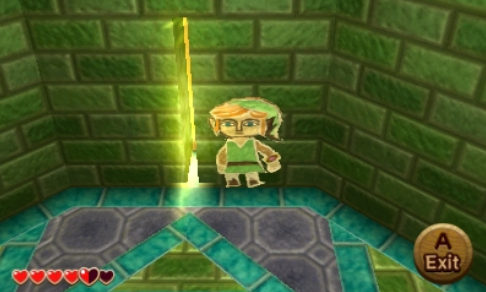 The fastest way to leave the dungeon after getting Ravio's Bracelet involves merging to the left on the balcony. With a very precise fall, you can circle around and barely fall into the level below, skipping having to merge from the east side instead.

In typical speedruns, the benefit of going East for the Silver Rupee outweighs using this trick, but it is still faster in a dungeon Individual Level run.

It's possible to skip the Pendant of Courage by using Cutscene Dying into the dungeon exit. However, you won't be able to complete the game as normal after skipping it.

For more information, check the Pendant of Courage Skip page.