With the main version this game is speedran on being JP, and Tingle Tuner being a powerful and versatile tool, it is quite an annoyance to learn how it works considering the text is in Japanese when connected. This page summarizes how to control the Tuner, as well as what it offers in terms of items, secrets, quests, and exploits when connected.

Below is a summary on how to operate the Tuner once connected. 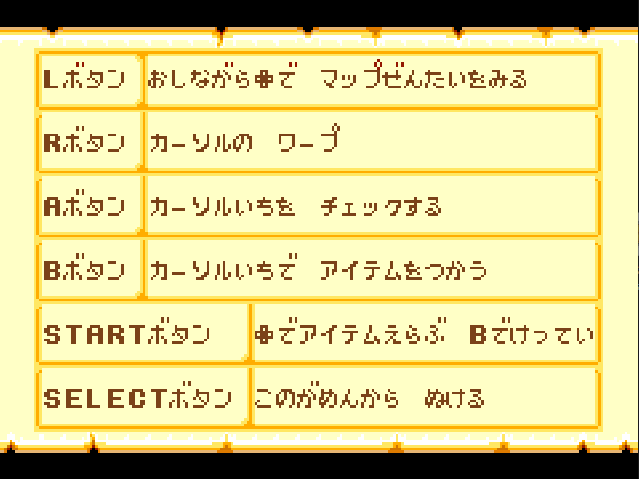 A
Does the Tingle "Hey", and can be used to talk to Tingle when the cursor hovers over secrets.

Start
Press to bring up the shop menu.

Select
Press to bring up the controls menu.

L
Hold to shift the map view with D-Pad

R
Returns the cursor to link if remote.
Locks onto enemy if they are L-targeted.

This can be useful for rupee routing, as using a Tingle Bomb on a targetted enemy drop a yellow or red rupee.

Connecting the Tingle Tuner gives access to a shop where Tingle offers various items for rupees. Below is a list of the offered items: 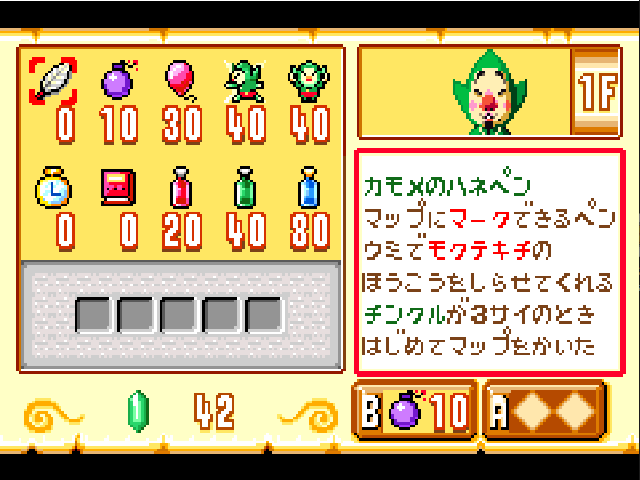 Seagull Pen
Cost: 0 Rupees
Allows the placement of a waypoint on sea charts on the Tuner map during sailing. The compass on the tuner will direct towards this waypoint

Tingle Bomb
Cost: 10 Rupees
Tingle will detonate a balloon at the location of the Tuner cursor. If the cursor is tied to Link, there will be a delay. If done remotely it will activate instantly.

Tingle Shield
Cost: 40 Rupees (30 after discount)
An invincible shield for 10 seconds. Has a cool-down time to prevent overuse.

Kooloo-limpah
Cost: 40 Rupees (30 after discount)
Random Tingle service. It could potentially grant nothing, tell your fortune, or give one of the Tings. The best outcome is a Tingle Shield with a simultaneous Tingle Balloon, which lasts longer than a normal Tingle Balloon.

Hand-me Down Tingle Tuner
Cost: 0 Rupees
Allows you to purchase additional items from Knuckle. Instructions on how to obtain this item are in the relevant section.
The items that are for sale are All-Purpose Bait (20 rupees), 10 Arrows (50 rupees), 10 Bombs (40 rupees, must have full arrows to buy).

Similar to the treasures noted below, there are specific secrets that unlock permanent discounts or additional items in the shop. They are highlighted here:

In order to obtain this item and have it usable in the Tingle Tuner shop, you must have the Tingle Tuner connected at go to the outset shore, this will activate the sequence of events with Knuckle. Knuckle will then ask you to stand at specific spots, adding up to 5 locations. They are highlighted below:

Location 3 "The ladder that nobody uses"

Location 4 "The largest rock at the top of the mountain"

Location 5 "Leap of faith below the rope bridge"

Completing this quest will spawn Knuckle at Tingle Island, allowing you to take a photo of him for a figurine (This is not the case in HD, you need all Tingle Statues for him to appear on that version).

There are a ton of hidden secrets scattered across the overworld and dungeons, revealed by interacted with them, such as using a tingle bomb, hovering their location with the cursor and pressing A on the exclamation mark, or walking to the cursor if it gets stuck on specific secrets. A complete gallery of all the secrets are documented here. Some specific secrets (activated by Tingle Bomb) important for speedrunning are noted below:

Note that this rupee shares its permanent flag with the joy pendant inside a pot in the boss door room. Thus you can only collect one or the other.

Having the Tuner connected unlocks some extra light rings containing rupees in the Great Sea. There is one in each quadrant except for Windfall, DRI and Thorned Fairy.

Among the Tingle Treasures hidden in the dungeons, there is one chest per each dungeon that contains a golden Tingle statue. When obtained they appear on Tingle Island. Their locations are noted below:

This one in particular does have a speedrun use, specifically in the current AD route. It can also be revealed by placing a tingle bomb in the upstairs area of the Earth Temple, in the shortcut area where there are many rupees behind a wall, because doing so also sets the chest spawning flag.

You can get rupees from Ankle on Tingle's tower if you find Tingle Statues. You get 50 rupees for every statue found, and an extra 500 rupees when you find them all.

Legend of the Fairy

There are secrets specifically in TotG that prompt tingle to tell the Legend of the Fairy, which is a story about Tingle from Majora's Mask, acting as a parody of the intro. It is mostly useless, and not permanent, but is required for the 100% All Menus + Figurines, so they are documented below:

TotG Legend of the Fairy Page 1

TotG Legend of the Fairy Page 2

TotG Legend of the Fairy Page 3

TotG Legend of the Fairy Page 4

TotG Legend of the Fairy Page 5

Sometimes in routes, for example All Dungeons, there are lengthy swims that are not possible without taking an air refill stop (such as FH to Gale). In this case usually you would make a stop at a place such as a reef, however these detours can sometimes be a bit indirect and require you to maneuver into the corner refill spots. It is possible to use a Tingle Balloon to activate a balloon mid charge or swim, swim onto an island, and slide off before the balloon ends. This has Link running backwards in the air, restarting the air meter, and dropping Link back into the water once the balloon ends, with a considerable amount of speed conserved. This allows for much more direct, one-shot paths utilizing favorable islands such as Bomb Island or Fairy Islands.

By using a Red or Blue Ting during a Zombie Hover, you can restore health and finish the hover at your destination without dying

You can pull Infinite Bombs using Item Swapping, as well as pull a bomb if you have none left in your inventory. This can be done without connecting the Tuner.