There are 12 shrines in the Wasteland region. 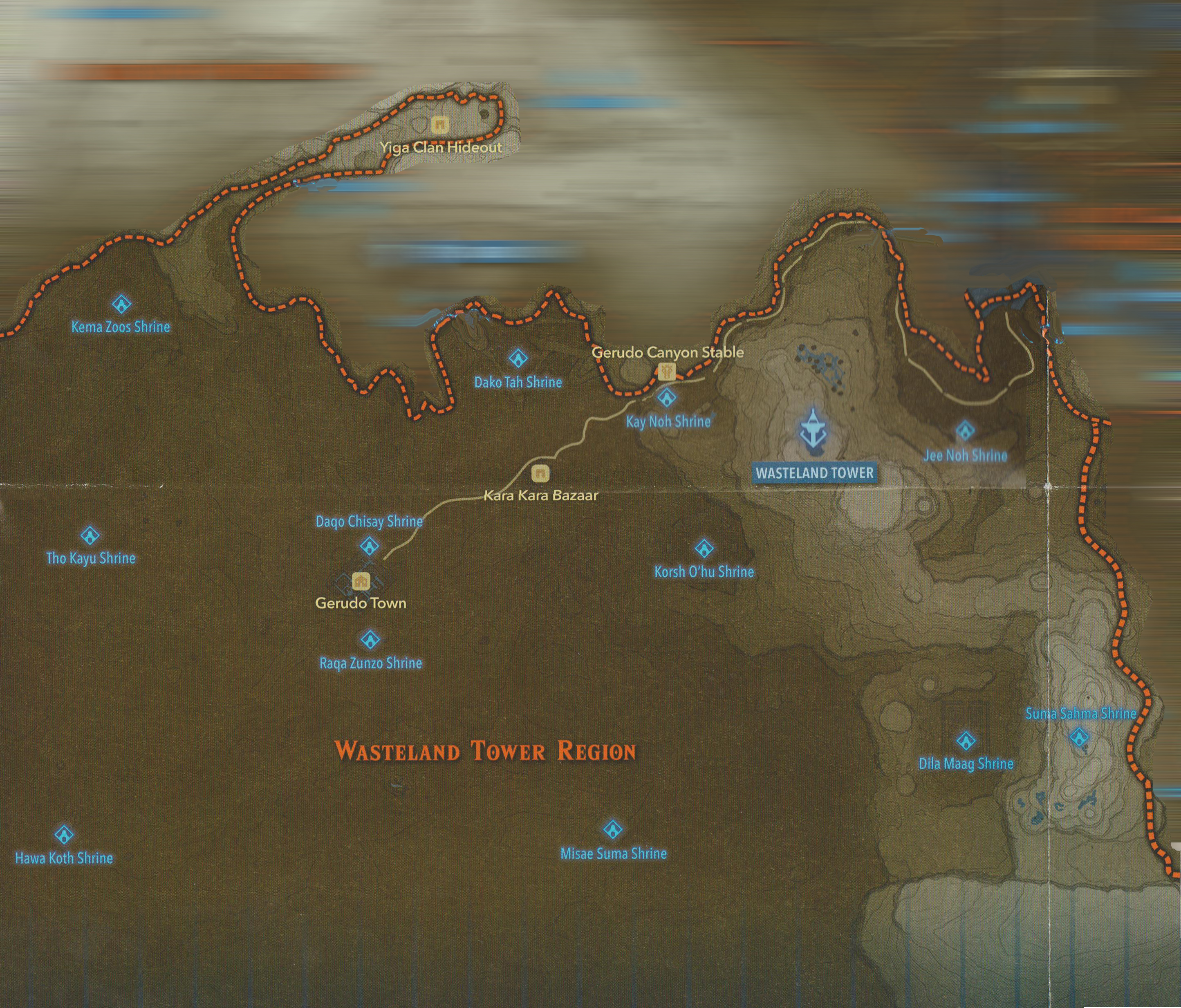 First jump onto the railing at the sides of the start of the shrine. From there shield jump to the platform you'll see a bit higher up, which will skip going all the way around.

From there shoot a bomb arrow at the left fence behind the opening at the end of the room. That will activate the switch that will raise up the platform right below the opening.

Once the platform has been activated, shoot another bomb arrow to the left of the electric cube. That will knock it off from its stand and will remove the electricity that was previously going through the metal line. Be careful of where you shoot bomb arrow, since if the cube falls off to the void another one will spawn.

With no electricity, make it across the metal line and grab the cube. You'll have enough time to get on top of the platform and get up with it. Once above, use stasis on the electric cube to make it to the end.

You can completely skip this shrine's puzzle by placing a metal box in front of the ending gate and hitting it at least twice with a thunderblade.

You can also get over the wall to the end by using stasis in one of the following ways:

Shoot the switch of the first room with a shock arrow to open the door. Continue straight and place a cryonis block to get on top of the path.

Make your way to the end and enter the room on its right. You'll see a third switch you'll have to shoot twice. Make sure that the second shot reaches the switch before it turns orange again, and that will activate the door. Now simply use the metal wheel to open the door to the end.

This, although not the fastest strat, is definitely the easiest one and can be consistent. You can get to the end with two Shield Jump Boosts. To perform them, shield jump on the floor, mash jump, and after the jump, unequip the shield and detonate a bomb. It'll always send you backwards.

Thanks to the right wall not being completely vertical, it is possible to run off of it and make it on one platform higher up with a shield jump. From there, either shield jump or shield high jump to get on top of the ceiling.

First, make it to the moving platforms by Shield Bomb Jumping to them. Once there, jump to the lamp sticking out of the wall. If you find it too hard with the platforms moving, you can use stasis on them. From the lamp make it on top of the wall and continue until you can perform a Shield High Jump to yet again make it up another wall. If you do it correctly, you'll be able to run straight to the end.

You'll be able to break the puzzles of this shrine as long as you have either shock arrows or an electric weapon. For the first room, shoot a shock arrow at the metal switch or at its receptor. That'll open the door for a very small period of time. Make sure you were running right before shooting the arrow or that you were right next to the door.

The same method will work for the second switch, although you'll have to shoot it twice so that the boulder has enough time to fall off.

The third switch is the same, but for this one you have to make sure to shoot two shock arrows before the switch turns orange again. This is easier with a bow with a Quick Shot bonus or with a Lighting Rod.

It is also possible to skip the key with stasis or octo balloons.

Skipping the puzzle for this shrine is as simple as hitting the switch on the right of the ending structure with a shock arrow or an electric weapon.

However, if you don't have the means to hit the switch with electricity, you can perform a normal shield jump off of it.