There are 9 shrines in the Eldin region. 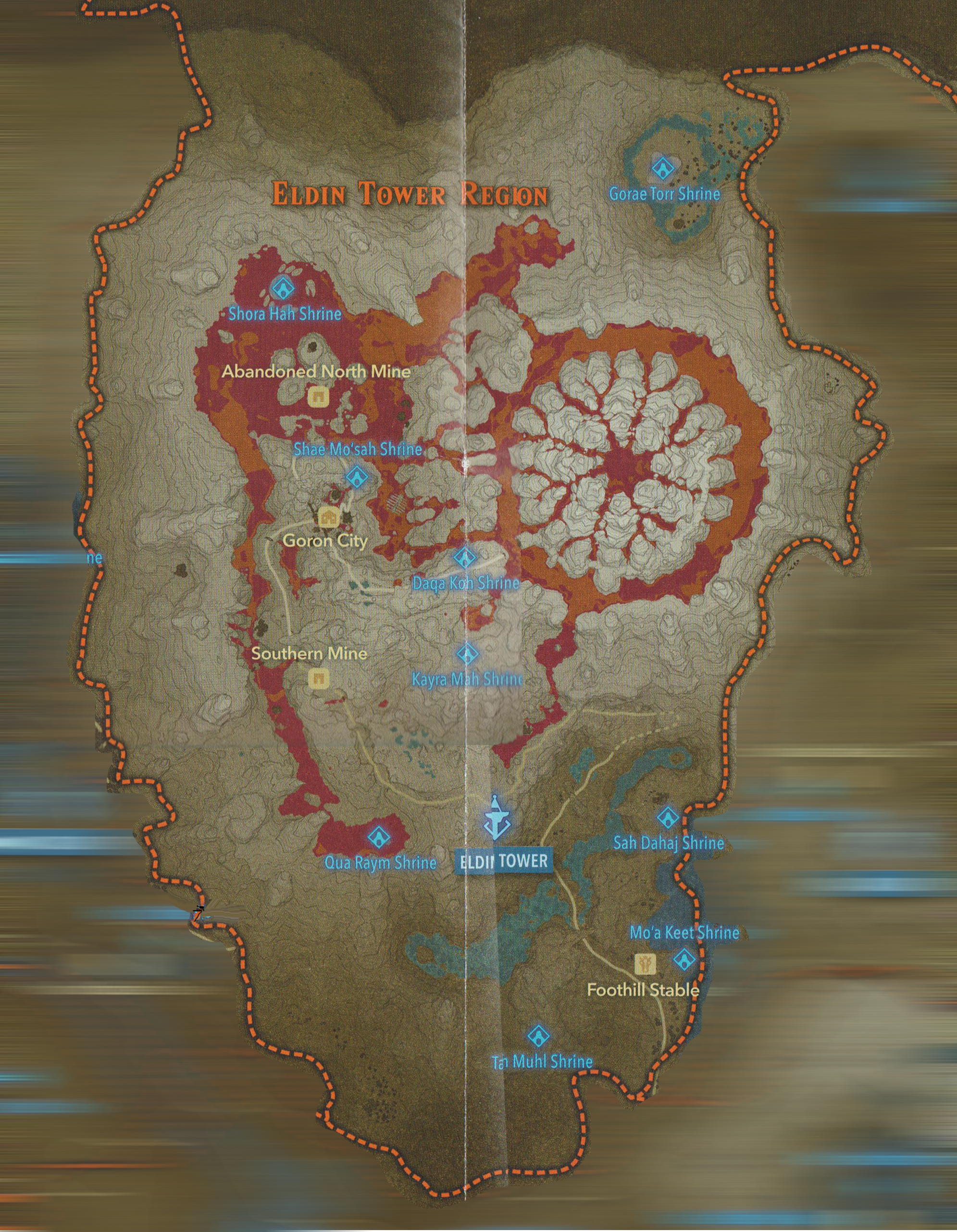 It is possible to reach the end of this shrine by jumping right as you get launched up. If timed right, you'll be sent higher than normally, which will be enough to get to the end.

For this shrine simply make sure to not get hit by any spiky balls. Whistle Sprinting is very useful.

Using stasis in the first section can be skipped with a shield jump. This however is practically not faster than using stasis, since you can quickly remove the stasis, allowing you to use it again much faster.

Only one boulder at a time will get out of the first hole, but many spawn from the second one continuously. If you Stasis one right as it falls, it'll block the others off and you'll have enough time to get past under it.

There are different methods that will allow you to skip the key of this shrine.

By making it on top of one lamp and using stasis on the platform next to the ending, you'll be able to shield bomb jump to it.

Shoot a bomb arrow or a normal bomb in an angle so it'll blow the bricks blocking off the end up. Once destroyed, shoot the metal chest on top of the platform next to the ending platform, which will raise its counterpart down. Get on top of it and push off or destroy the wooden box. As you get raised up, stasis the other platform so you can jump on it and from there to the end.

You can get launched to the end by using stasis on the wooden box.

Shooting a bomb arrow or throwing a bomb at the leaves will destroy them without the need of using fire (fire arrows work as well). Do that for the first two leaf barriers, then place a cube bomb next to the fence of the room with the switch. That'll destroy the two wooden boxes allowing the platform on top of them to fall off and push the switch.

Shooting a bomb arrow in the last room instead of placing a bomb has high chances of softlocking the shrine, since it'll push the platform off as well.

The puzzles of this shrine can be skipped by shield jumping off of the starting structure.

The last one can also be skipped with a precise jumpattack to bomb boost.

It is possible to skip the Key of this shrine, saving a decent amount of time.

With a Shield Bomb Jump

Place Link on top of the first switch and use stasis on it. Go through the now open door and climb up the stairs. Once you're on the higher level of the shrine, climb up the next small stairs you'll see at your left. From there, shield jump to the platform where the metal ball is supposed to roll through, and from there fronthop to the small wooden platform containing the ball. Position Link carefully so there's nothing on top of him, and Shield Bomb Jump to the ceiling platform that goes across the two walls. From there jump on top of the walls and fall down to the last room of the shrine. Once again place Link on top of the switch, use stasis on it and make it to the end through the door.

Grab the barrel on top of the wooden platform of the first room of the shrine by shooting a bomb arrow to it, throwing a normal bomb or with the fire provided by the shrine. Place it on the rectangle made of leaves on the floor, then attach at least three octo balloons on it and immediately front hop to get on top of it. You'll raise up along with the barrel, and as long as its upwards direction doesn't drastically change all of a sudden, you'll be able to make it through the gap of the ceiling, which will put you at the last room of the shrine. Once there, position Link on top of the switch and use stasis on it to go through the door that will bring you to the end.

Once again grab the barrel on top of the wooden platform at the beginning of the shrine. Place a cube bomb on the middle of the rectangle made of leaves, and carefully place the barrel on top of it. Use stasis on it making sure it stayed in place, hit it a couple of times with a weapon, detonate the bomb and get on top of the barrel. That'll launch you upwards through the gap of the ceiling and you'll be in the last room of the shrine. Once there, position Link on top of the switch and then use stasis on it to go through the door that will bring you to the end.

One way to make it on top of the barrel is by shieldjumping and right before landing on top of it removing your shield. That'll prevent you from sliding off of it. You can also fronthop and get on top of it, but it may be a little precise given how it's higher than usual because of the bomb below it.

This shrine has many different skips.

This is most likely the fastest method.

By bomb high jumping onto the metal block and attaching octo balloons on it, you can glide over to the third updraft. From there you can skip the last flame with a single bomb while paragliding, or with the Turnaround Boost method shown below.

This is one of the fastest methods to beat this shrine.

Place a bomb at the top of the stairs. Perform a shield jump and detonate the bomb in mid air to go over the stairs.

From there, you can use one torch to get up on a wall and perform a Bomb High Jump to glide straight to the end.

This method is also pretty fast, but slower than the previous two and much harder.

First raise up the metal block, go under it and make your way to the first blue flame of the shrine, to the left. It is possible to skip moving the next two metal blocks and instead jump off of the white rails, but it's very awkward so moving the left one and doing a shield jump to the end is recommended.

There, take a normal arrow out and light it up with the blue flame. Position yourself behind the candle and shoot two arrows, one at each moving platform with a candle on top of them. If done correctly, you'll light up them both, which will activate the updrafts. Keep in mind that if you change the camera angle right after shooting the arrows, the jingle indicating that the updrafts have been activating may not play. Here's an image indicating where to shoot.

Once you've activated the updrafts, make it back to the beginning by jumping on the platform with a chest, and from there to the starting platform past the first metal block. Here's where the very hard trick comes.

With running speed, jump off of the little elevation provided by the entrance and do a Shield Bomb Jump. If it goes well, you'll land on top of the platform containing the closest updraft. Making it on top is very hard, since chances are you'll either not have enough height, too much, or you'll slide off once you make it on top because of the bomb damage.

Here's a clip of a failed Shield Bomb Jump attempt:

Once on it, jump and activate the paraglider to go upwards. Continue to the next updraft and from there, make it to the end with a bomb boost. This can be pretty precise.

Another way to skip the spin attack at the end is with a Turnaround Bomb Boost.

Position yourself at the edge of the platform you're standing on, and choose to either jump left or right. In the air, perform a Bow Double Bomb with Shield Jump. If done correctly, you'll make it across the gate. Here's a video demonstrating it:

These are the fastest strats for this shrine, however some of them can be pretty inconsistent. Here are easier alternatives.

It is possible to light up the last candle from the beginning one. Stand behind it and shoot an arrow with blue fire like this: 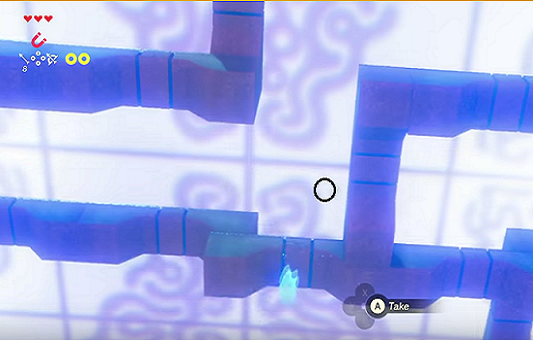 Done correctly you'll light up the candle at the very end, which is needed if you don't want to do the Bow Double Bomb trick or the Bomb Boost. You'll be able to see whether or not you did it correctly by carefully changing the camera angle or by listening to the sound the candle makes when it lights on fire.

From the first blue flame, take aim the following way and shoot an arrow with blue flame: 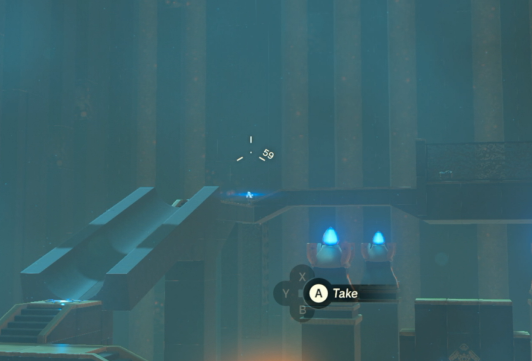 That will light up the third candle, completing the staircase so you can continue.

In order to skip the fourth candle, jump on it and do a shield jump over the fence. It is also possible to make it by jumping off the candle with running speed, but both methods can be a bit hard at first.

The fifth set of candles can be skipped in two different ways. If you activated the updrafts with two arrows, you can simply jump to them from there. However if that wasn't the case, you can jump on the right candle, from there to the water tap, and from there to the platform at its right. If you make it there, you'll be able to jump past the gate, skipping the candles.

The sixth candle can be skipped by jumping on the moving platforms and using the paraglider. Once you make it to the second platform, jump to the updraft ahead.

From the Fifth Set of Candles to the End

Once you make it to the right platform as you are skipping the fifth set of candles, jump on the big candle placed behind you on that same platform. From there, jump on top of the gate that was initially blocking you, and from there make a jump with paraglider to the closest candle emerging from the lava at your right. If you make it on top of it, jump to the next one, and from there to the end.

This route uses the easier skips, so it's not very difficult to pull off. However keep in mind that the strats shown at the beginning are all considerably faster.

Shoot a bomb arrow, a fire arrow or throw a bomb at the first wall of leaves. Then either blow up the wooden boxes the same way, or use the fact that the right wall isn't completely vertical to jump from it to the end.