There are 9 shrines in the Lanayru region. 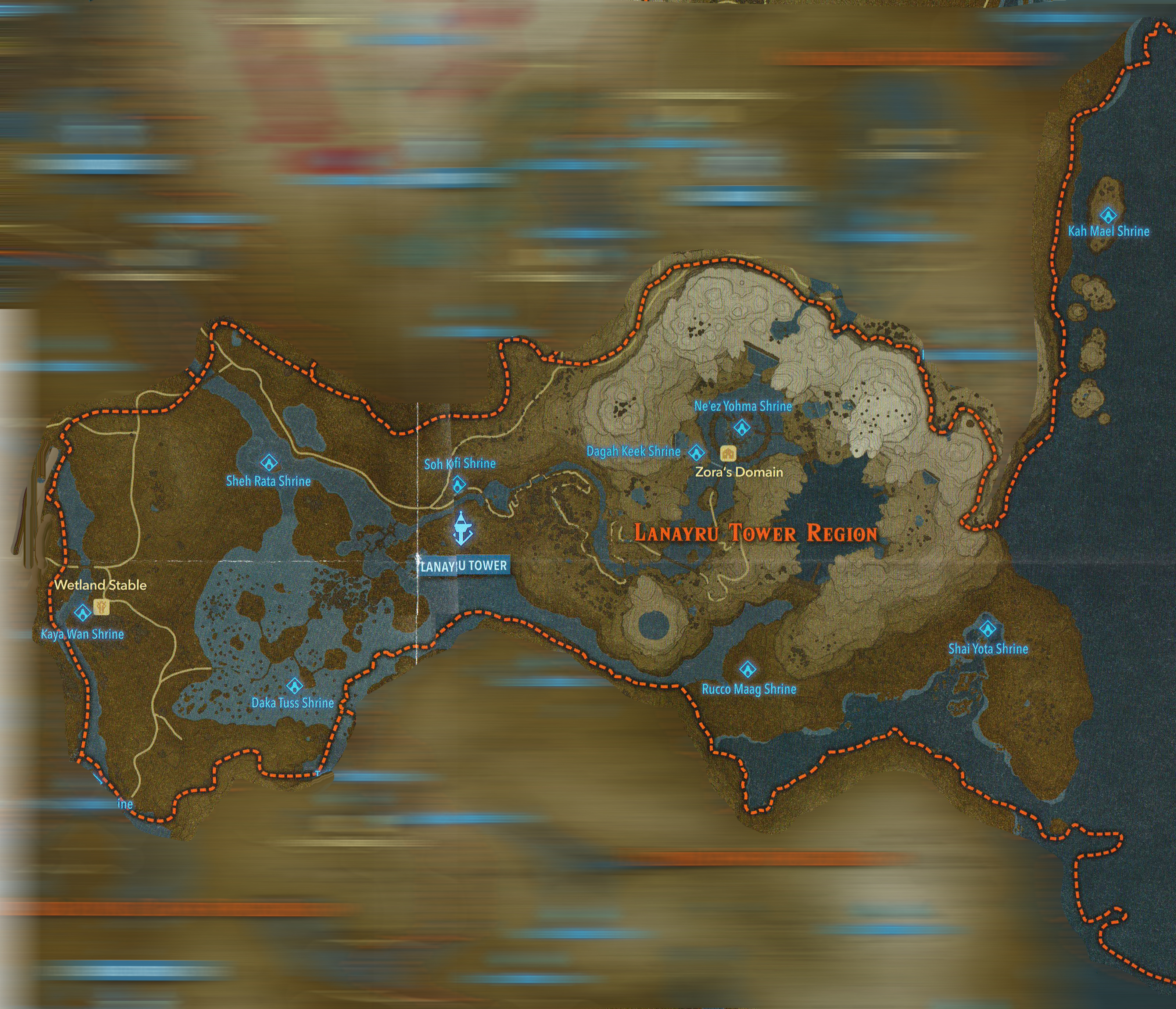 The first room can be done fast by detonating a bomb underwater that will launch one of the balls to its hole.

In the second room, it is possible to go through the opening underwater, skipping the puzzle.

Another way to do it is by using the metal bowl to push you.

Stasis the bowl right on the surface of the water, above the opening. Dive under it and wait for stasis to run out to get pushed through the opening.

Place two Cryonis blocks as far to the upper right corner of the water as you can. Then place the metal bowl in between both blocks, jump on it and destroy the further block. You'll fall to the water along with the bowl which will push you through the opening.

Jump on the left platform of the scale, grab the metal barrel with Magnesis and place it on the right platform in order to raise up the one you're on. When the left platform reaches its maximum height, jump. You'll jump higher than usual which will allow you to get to the level the ending is on.

Alternatively, jump on the left platform and shoot two arrows at the ropes sustaining the wooden platform with the metal box. It'll drop down to the right platform and you'll be launched up.

You can get past the first part with a single cryonis block by performing a cryonis shield jump off of it as it's rising, and detonating a bomb. This is very precise. Afterwards, proceed to the end as intended.

Use stasis on one of the first round boulders that will fall off. Hit it and place it on the ending hole. From there, use either stasis or octo balloons to get over the gate blocking off the ending.

From the start of the shrine, shoot a bomb arrow to the Big Sheikah Heirloom so that it starts falling off. This will only work with bows that have a range of 40.

You can shoot either bomb or fire arrows to all the candles to light them up fast, but it is possible to skip the puzzle faster.

With a Cryonis Shield Jump

By placing a cryonis block and shield jumping off of it right as it's rising, you can do a high shield jump and then detonate a bomb to get extra distance and height.

The fastest way to actually beat this puzzle is only slightly slower than doing the Cryonis Shield Jump method.

From the Small Cube

This method can be done very fast, but it's pretty hard and not worth going for since it would still be slower than the Cryonis Shield Jump method.

First shoot the switch on the bottom of the small cube to rotate it. Then place a Cryonis block next to it and jump off of it to the small cube. From there, do a shield jump to the lamp next to the ending structure and remove your shield right before landing on it not to slide off. As you land on the lamp, quickly do a shield jump over the wall that leads to the end.

From the Big Cube

This strat is seconds slower than the previous one, but it is very easy. However if you have fire or bomb arrows there's no reason to go for it.

One, jump on top of the candle again (unless you never fell off of it), jump and glide over the wall to the end.

Two, run and perform a Shield Bomb Jump over the wall to the end.

It is possible to jump over the fence with a cryonis shield jump.

With another cryonis shield jump, you can make it to the other side and activate the door by placing the metal barrel on top of the switch.

It is also possible to jump off of a candle to the end.

This is a Minor Test of Strength Shrine.