There are 9 shrines in the Dueling Peaks region. 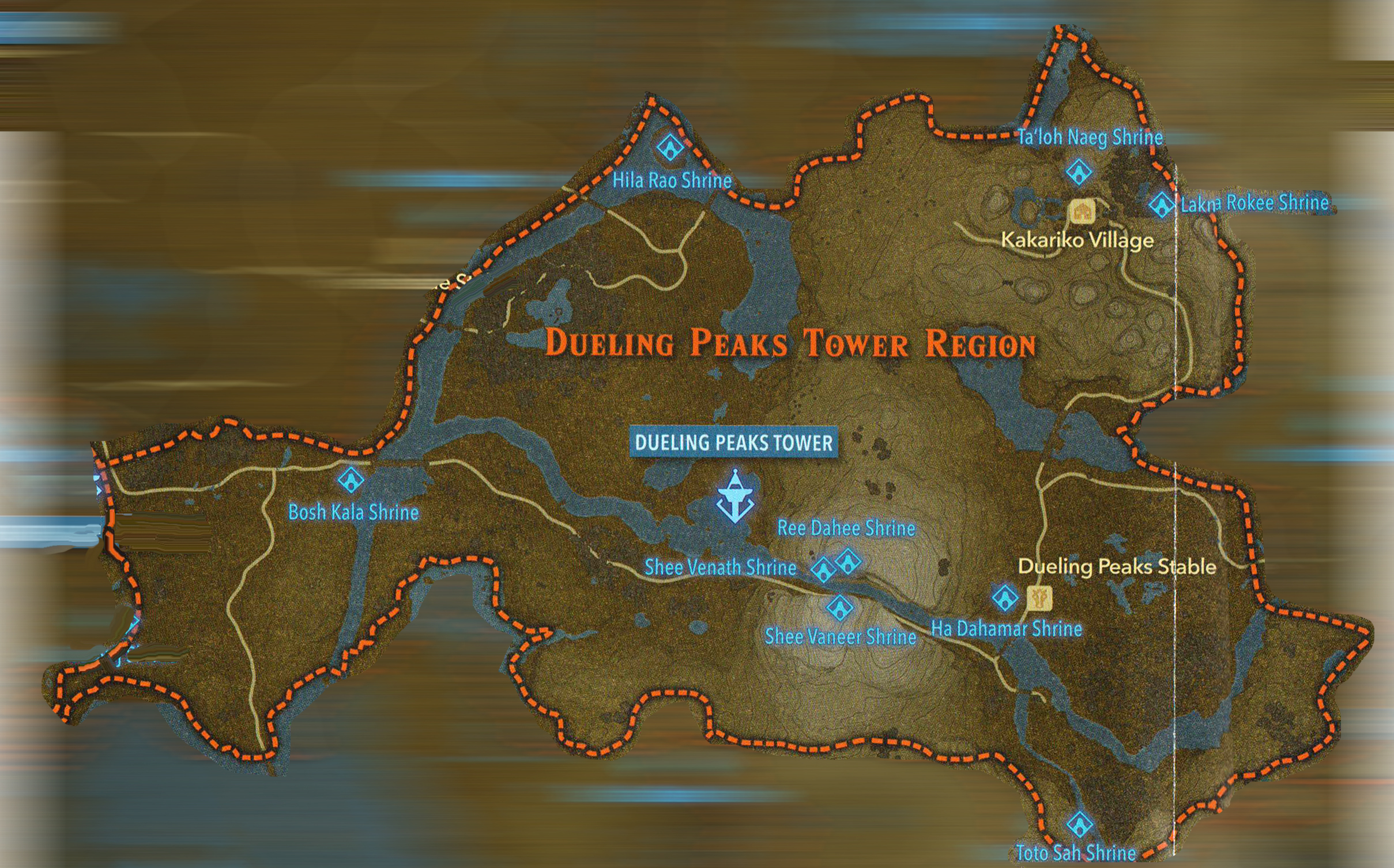 There is nothing special in this shrine. Simply glide your way to the end.

The first use of Cryonis in this shrine can be skipped with a Shield Jump. The ball puzzle at the end of the shrine can be completed without Cryonis by first using Stasis on the ball as soon as it spawns, then shooting a Bomb Arrow such that the ball is shot up the slope and lands in the hole.

The fastest way to complete the shrine is by jumping over the bodies of water with Cryonis Jumps.

This is a slower and harder method to complete the shrine.

Place a Cryonis ice block underneath, near the end of the floating platform. Place a second block just in front of that and the platform should rise up, allowing you to climb up it and jump to the top.

Place a Cryonis block underneath the center of the floating platform then jump on top. Turn around, Shield Jump to the blue lamp, then jump to the top of the protruding ledge. Face the ledge behind you and Shield Jump up to it.

Stand on top of the floating platform and drop at least two Octo Balloons. Wait for the platform to rise then jump to the top.

This next video demonstrates the three previous methods.

It is also possible to do the second method without using the wooden platform at all, but it is much harder.

It is possible to boost over the gaps and skip all the puzzles, it requires quite a bit of healing/health though. Speed Up is not necessary but it makes the boosts more lenient.

Solving the puzzle as intended is the fastest way to complete the shrine.

The main puzzle in this shrine can be skipped by climbing high and gliding to the ending. Ride the platform up and jump (Shield Jump for extra height) just as it reaches the top, putting you on a higher ledge. Alternatively, use a Shield High Jump to reach it. From here, Shield Jump to the indent behind you. Now either glide down and Damage Boost your way over to the ending, or more easily Shield Jump (unequip shield) onto the big lamp, climb up and glide from there.

Solving the puzzle as intended is the fastest way to complete the shrine.

It is also possible to skip the puzzle the same way as Shee Vaneer, only the shrine layout being flipped.

This is the combat teaching shrine.

It is possible to entirely skip the last gyro puzzle. The blast of the bomb will put in Link in a ragdoll state and boost the platform upwards at the same time, this will launch Link directly to the end of the shrine. The position of the second gyro puzzle can be a bit precise.

Dropping a bomb and hitting the bottom part of the middle platform will boost it upwards, making it possible to jump very high and glide to the end. This is a slower but slightly more consistent way of skipping the last gryo puzzle.

This saves around 2 seconds compared to moving the gyro structure, but it's much more precise.