This diagram represents all of the major known flags and triggers in The Wind Waker, that lead towards breaking the Hyrule Barrier and beating the game.

Completely white arrows represent a trigger that is required for another event to occur.

Arrows that are just an outline represent natural progression in the storyline and not necessarily a direct trigger. 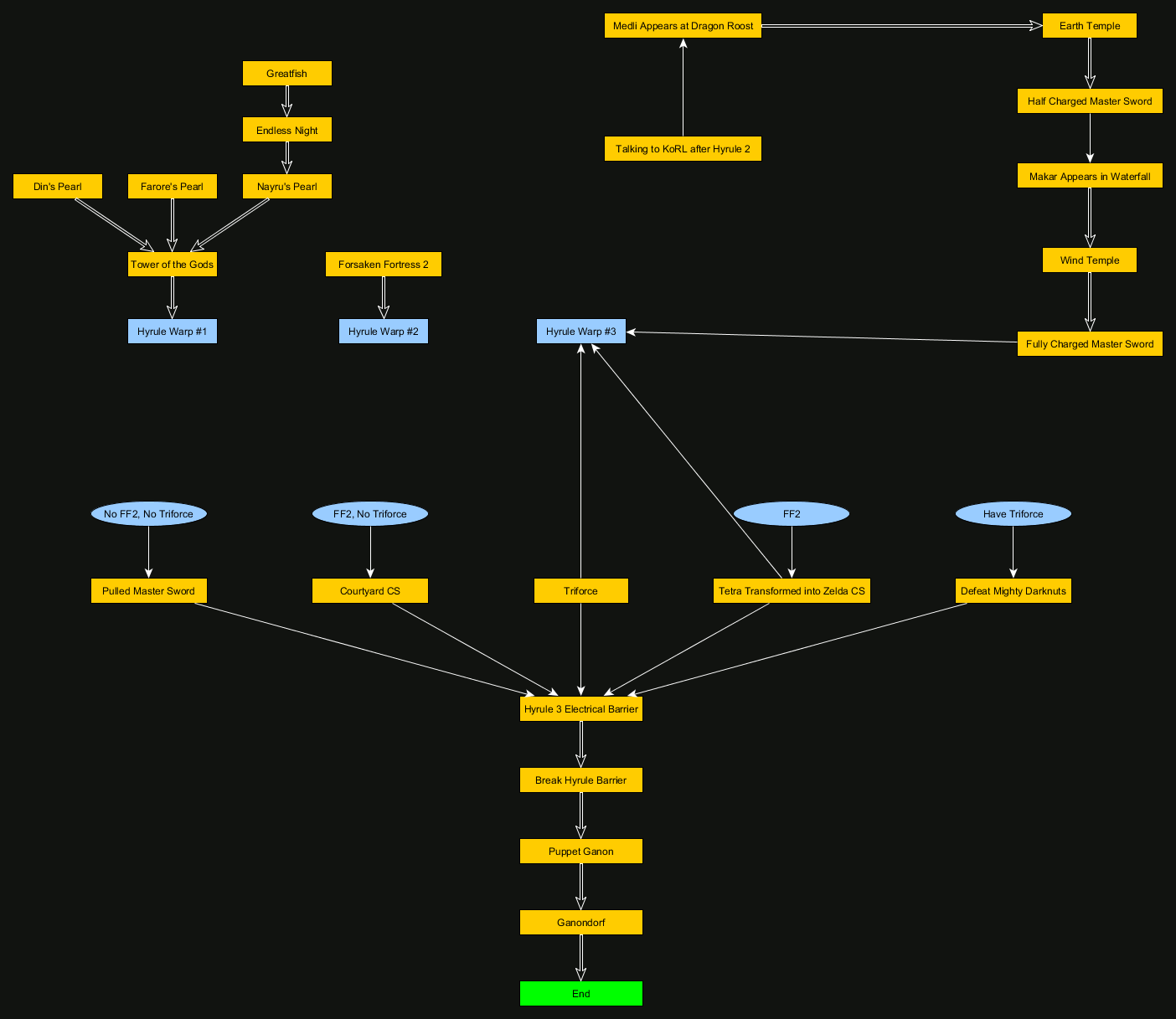 Getting in the Boat

Early game requirements: Buy the sail AND Din's Pearl AND (Set wind direction South OR have been in the boat before)

After going down to hyrule 1: Pull the master sword

After going down to hyrule 2: Watch the tetra to zelda cutscene

After Wind Waker Cutscene AND obtaining Farore's Pearl : All Islands Except Forsaken Fortress

After Wind Waker Cutscene AND obtaining Farore's Pearl AND having Master Sword : All Islands

Cutscenes in TWW and TWWHD make use of special animations to make Link move around. However, the game doesn't use all of the animations right away. Instead, they are split into 2 different sets: Animation Set 1 and Animation Set 2.

When starting the game, the first Animation Set is used. But upon enting the Helmaroc fight, the game switches to the second Animation Set.

Here are cutscenes that use Animation Set 1:

And here are cutscenes that use Animation Set 2:

These lists might not be exhaustive. Entering the Helmaroc fight is what changes the animation set. One must enter that fight with Animation Set 1.

The Pirate Ship is one object that can be found in various places through the game. Here is a list of all known locations:

Outset stays in Prologue State as long as the Gossip Stone Trigger in FF1 isn't activated. That trigger can be skipped, which can lead to some more sequence breaks.

Entering or leaving a pirate ship can have different results depending on what you did previously on the savefile. Here is how they work: 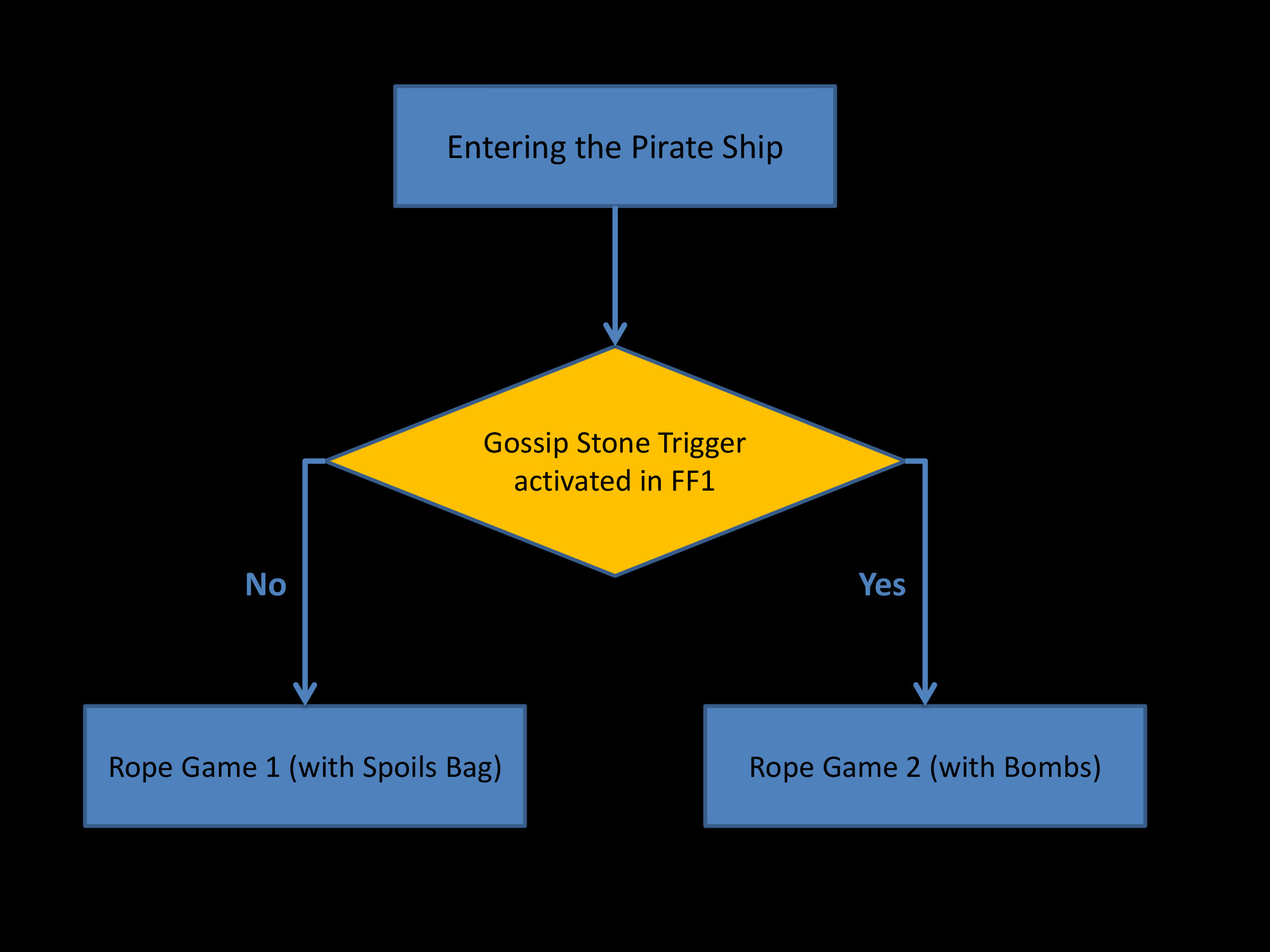 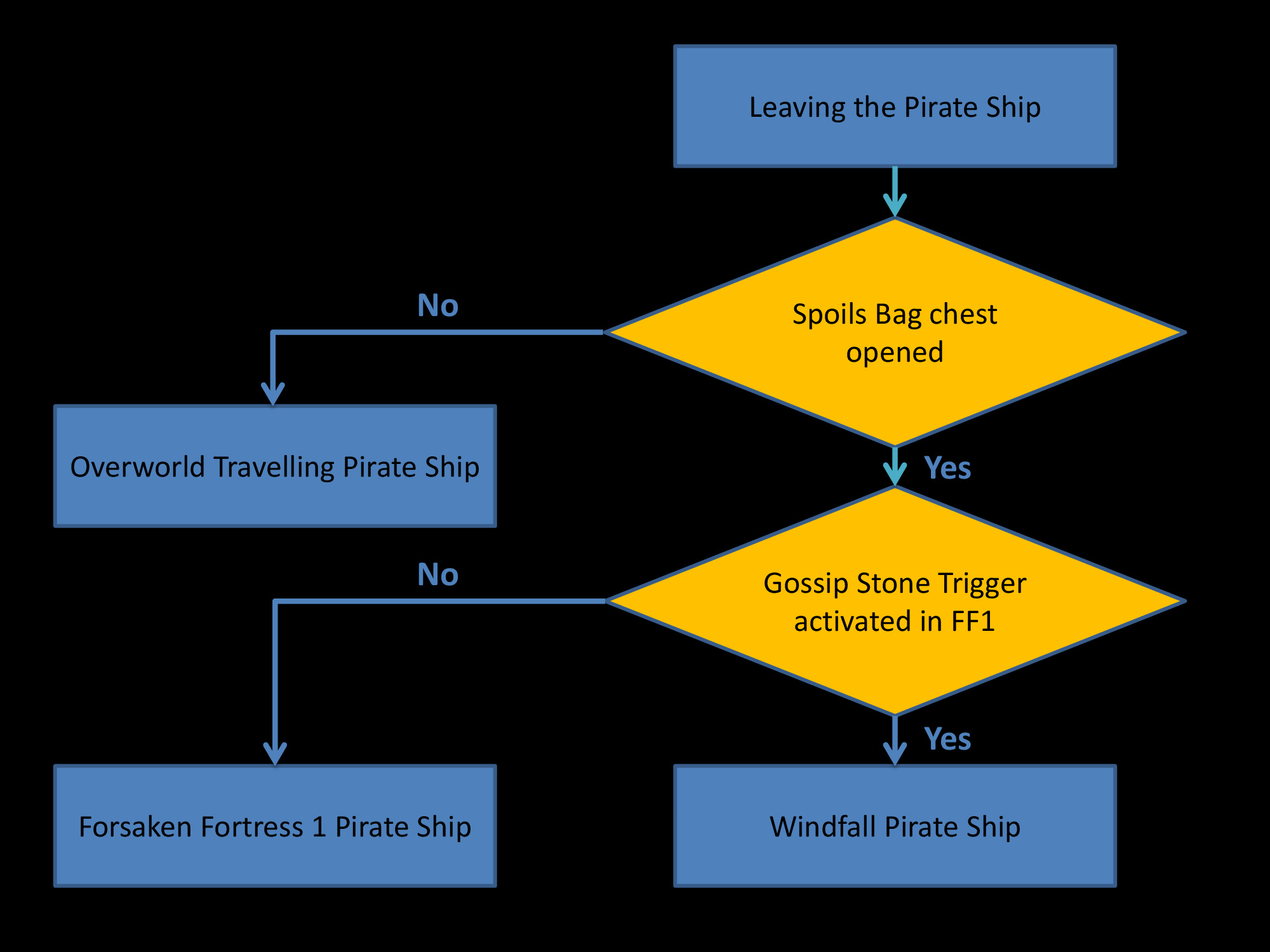 The Spoils Bag chest only appears during the day, and not during night or Endless Night.

Savewarping refers to the act of saving and quitting the game. Upon reloading the save, Link is usually placed back on the shore if he saved on the island, in the middle of the ocean if he saved in the water (far away from the island), or at the beginning of the dungeon if he saved inside it. However, savewarping works very differently during the early game, here is a list of what happens depending on what you did in the game.

Savewarp flags behave in tiers, the moment you trigger a higher tier flag, triggering a lower tier flag will not change your savewarp location.

By performing Outset Escape, you can avoid hitting every single of these flags. They can then be used at your advantage to:

The Ghost Ship only appears at night, so manipulating the Day/Night cycle is crucial in a speedrun in order to skip having to obtain the Song of Passsing or needing to wait for the Ghost Ship to appear. The Ghost Ship also appears at different islands depending on the moon phase, and manipulating its location is also important. The time is measured in-game in terms of hours and minutes. 0:00 is defined as midnight, 6:00 is when it turns day, and 18:00 is when it turns night. The in-game date also advances by 1 whenever the time passes midnight.

Time passes differently depending on the current time. Between the times of 6:00 until 11:00 and 18:00 until 23:00, time passes everywhere normally on every island, including inside dungeons, buildings, and hidden caves. However, at any other times, time will not pass on certain islands. These islands include Windfall, Dragon Roost, Forest Haven, Outset, Gale, and Headstone. Time will also not pass inside any building, dungeon, or hidden cave. Because of this, it is crucial to wait until it just turns day or night if you want time to pass at certain places, or arrive at a certain place before it turns day or night in order to have time freeze.

Events That Reset the Current Time