The problem with the original method was that if you performed the Faster Kargarok Battle you would have to transform at the start to prevent the camera from going crazy, this meant to had very little time to setup the clip with a nice camera. Further more flying below the map and getting back in bounds without voiding was somewhat hard. With this Kargarok clip later on you don't have to worry about the camera, furthermore since you clip out of the left side you do not have to go under the map when flying OoB. This means there is no risk of voiding out after getting the clip. This method still saves 6s.

Here are some visual cues to help with the easier clip, flying to the right will help make give the same angle as in the pictures. 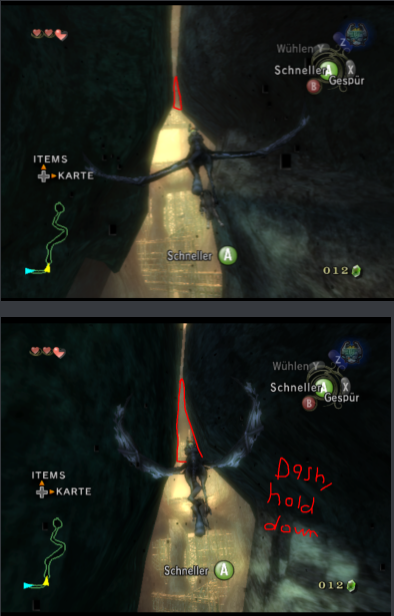 Original Method: Right after the start of the Kargaroc flying sequence it is possible to save around 6 seconds by taking the Kargaroc out of bounds and flying around the cave.
The clip is kinda precise and on the way to the Loading Zone you have to fly high enough or you will void.

It is possible with careful positioning and the direction you knock the bug, to manipulate the bug's movement so he will start charging at you from far away. This means you can then backhop and attack him as his invulnerability disappears, doing this causes the bug to hang around near the plank meaning you can grab onto him earlier than waiting for him to attack again. Please note you have to wait slightly before the regrab otherwise the bug is too low and you will simply rebound off him

Without bombs there is no normal way to get back to Zora's domain without the Master Sword. To get bombs then without beating Goron Mines, it is necessary though to get back to Upper Zora River to help Iza and get the bombbag.
This can be done by getting Epona out of bounds in the Northern Hyrule field and riding her all the way to the Zora's Domain loading zone.
The clip however is very very precise and hard, the setup makes it rather lenient.

During Lanayru Twilight and Midna's desperate hour it is faster to dash cancel through Castle town instead of waiting for dashing to come off cooldown cause Wolf Link moves very slow.

Bottom of the Tower

There is a bulbin archer at the bottom of the tower with ropes before the very first rope, it is required to kill him before you continue up otherwise he will snipe you down later on. To do this spinattack to deflect his first arrow and then when backs away from you hit him into the water which kills him instantly.

Once on the rooftops it is possible with perfect movement to make a earlier wind cycle that was intended with a diagonal jump from the bridge.

After skipping Goron Mines killing King Bulblin 2 needs a different approach cause the bow is completely skipped. This is done by throwing bombs at the correct timing. It takes 3 bombs to kill him and the timing is different for the third hit.
It should be noted that his hitbox is quite small for bombs to hit and hence hard to time, also his hitbox extends to the side somewhat also. You can just get a feel for the timing of throwing the bombs or buffer the throw with the pause menu.
Here is the unbuffered method with timing of when you pull out bombs and throw them.

Orcastraw made a setup video that depends on the "PAUSED" Box on screen to buffer the bomb pulls and throws.

By voiding out in the area before the King Bulblin 2 fight, it is possible to skip the fight altogether. This lets us get Zora Armor without the bow or any bombs. To pull this off, line up Epona parallel to the ledge shown in the video at the proper distance from the wall to her left and in front of her. Then angle yourself so that the yellow arrow is pointing straight up. Either target and side-walk in between Epona and the corner or sidehop into the same spot. Finally walk into the corner and, assuming you have the proper positioning and angle, Epona will push you out of bounds, and you will void.

There is a mailman trigger on the bridge that enters Castle Town. It is very thin and easy to LJA over. Firstly stand next to the 3rd post from the chain connects to the bridge. Then just aim over the bridge and LJA once it is over the void

It is possible after using the boomerang on the first kargarok to dash away from the wagon and leave it behind, as long as you killed the bulbins correctly as they spawned the wagon won't set on fire.
However if you leave the wagon behind there is a midna trigger before kakariko that forces you to go back.
This trigger can be skipped though by using an LJA. Hug the wall on the right until the point shown in the video and aim right next to the wall with the gale. Jump as soon as the boomerang goes into the wall.

If you performed the King Bublin 1 Skip beforehand his trigger will still be on the ground, requiring two LJAs to skip both triggers.
If you fail either LJA Midna will walk you back into the trigger requiring you to do the whole Wagon escort segment again.

It is possible to clip through the wall in the Cucoo Minigame house and fall right into Lake Hylia, setting you up perfectly for Pillar Clip right after wagon escort. Due to the removed sword recoil this is way easier in TPHD.

When learning Jump Strike it is 3.33s faster to spin-attack after doing the Jump Strike as it doesn't knock down the real Hero's Shade

When leaning Greatspin it is 2.73s faster to backflip into the greatspin rather than just a greatspin. This is once again because it doesn't knock down the real Hero's Shade