This trick is only useful in categories where you run up this log once. If you have to run this way again, and would have to repush the log, this would be slower.

After rescuing Gorko, you can skip the cutscene from pushing the first log by only pushing it once or twice, getting on top with a jumpslash and then immediately rolling up-left to jump off and grab the ledge to Faron Woods.

This saves 1-2 seconds, depending on whether you grab the ledge with one or two hands.

When chasing Machi from mushroom to mushroom, if you roll into the wall at the bottom right side of the sand slope with the Deku Baba on it, you will knock a vine loose. After finishing talking to Machi you can use that vine to reach the Elder's platform more easily.

In the Deep Woods, it is possible to use an Extending Blow on a Bokoblin to skip from the beginning of the woods to the front of Skyview Temple. This skips either the Goddess Cube Warp or going around the Deep Woods the long way. Note that after doing the overhead spin attack, you must hold forward to stay within final blow range of the bokoblin.

This trick saves a significant amount of time compared to the Goddess Cube Warp below; unfortunately, it is quite inconsistent. The distance that the Bokoblin is knocked back varies, meaning that even if the positioning and setup are correct, the Extending Blow trick can still fail. Many runners try Extending Blow once, then use Cube Warp as a backup trick. Other runners just skip the Extending Blow completely and do Cube Warp.

Hitting the Goddess Cube that is next to the Goron will cause Link to warp up to the ledge, skipping about a minute of Deep Woods. This only works in Hero Mode, as the upgraded Skyward Strike is required.

One setup for this trick is to get the Bokoblin's attention in the shadow below the arch. Then backflip four times and hold right until Link is touching the right hand wall. The Bokoblin should end up in the right position for the Skyward Strike to hit the cube.

While the above Extending Blow trick has obsoleted this in one sense, that trick is inconsistent enough that this Cube Warp is still used, either as a backup or in lieu of the Extending Blow.

Note: This only works on this particular Cube, as only this cube has a cutscene that moves Link's position.

Lake Floria Early is a way to get out of bounds in Faron Woods and run to the loading zone for Floria Waterfall. 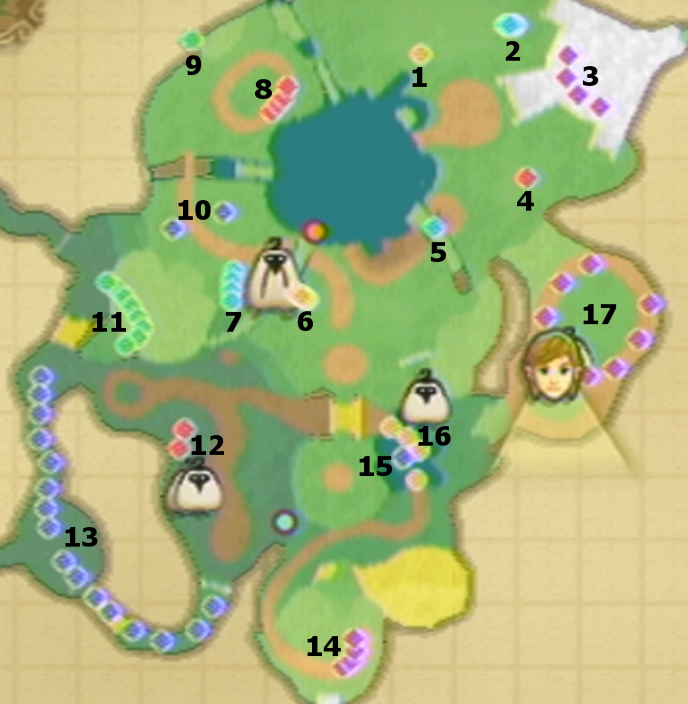 Note: This route assumes you use an Air Potion for the Tadtones.

At the end, drown to deathwarp to the top of the tree.

It is possible to escape the Ghirahim 3 fight in the boss rush minigame by accessing the bird statue at the bottom of the arena which is normally blocked off. By saving and reloading at this statue, the minigame flag goes away and the game instead puts you into the real Ghirahim 3 fight. However to properly continue the fight, you first have to get out of the walls that normally block the statue and then void out to respawn on the platform that Ghirahim 3 is standing on.

Getting to the Statue

To start, you need to have 2 bottles both filled with fairies to revive Link during certain parts of the trick. Go to the Thunder Dragon and choose to fight Ghirahim 3 (note that you can only do this without first fighting Ghirahim 3 if you're playing on Hero Mode). At the beginning of the fight, walk around Ghirahim about 180 degrees so that you line him up in the proper direction and hit him off of the platform. Hang off the ledge of the platform above Ghirahim and wait for Ghirahim to get back up and for the lower platform to grow in size. Once this happens, wait 4 more seconds, and then drop down, turn around, and begin hitting Ghirahim again. The platform you're on will begin to move horizontally and ideally, you'll knock Ghirahim off of the edge right before the platform begins to move vertically again. This will cause Ghirahim to fall onto a lower platform from before, and from here you'll want to repeat the process starting from hanging on the ledge again. If you knock Ghirahim off too quickly, then he'll be further away from the higher platform, and after dropping down to the platform on further cycles, the platform may move upwards immediately instead of only moving horizontally at first. On further cycles you also want to make sure that you jumpslash after letting go of the ledge so that you can turn around as quickly as possible to begin hitting Ghirahim again. After doing this for at least 4 cycles, the platform Ghirahim lands on should be low enough that you can jump into the area where the bird statue is, and save to reload the the real Ghirahim 3 fight.

A few things to note about how this fight works:

If you void out, you will respawn at your last safe ground. The Ghirahim 3 platform will spawn there as well as Ghirahim 3, and you can do the fight in strange locations. Ghirahim 3 can only fall off the platform if there is ground low beneath him. If there is an OoB void beneath him, he will instead hover in the air and he cannot be defeated. If Ghirahim 3 lands on real ground (instead of one of the platforms he creates) and Link final blows him, the game will crash. When Ghirahim 3 falls, a new platform is created below. After he stands back up, the old platform is destroyed and the new platform slowly moves towards the center of the map.

Escaping the Horde fight during boss rush is not useful because the load at the end of the Horde does not exist in boss rush state. It only works with Ghirahim 3. If you do the Horde fight in Boss rush and either die or complete it, the door back to Hylia's temple can be unlocked early. You can then reload the area by going in and out of the Temple. This is not useful because doing this requires having access to Hylia's temple layer 1 or 2, which means having already opened the Gate of Time or beaten Sky Keep, and having scene flag 7x04 in the Sealed Grounds to open the door to Hylia's Realm

You can skip the log falling cutscenes by doing a well-timed front hop right before the log falls. Because this is only faster if you want to fall down with the log, this is rarely used.

The window for this front hop is one frame if you are holding forward for the hop, and two frames if you tap forward for it.

First, use the rope to get on the higher ledge. With a precise jump forward, it is possible to grab the ledge next to the shortcut log, and gain access to all of Faron without saving Machi.

Because saving Machi is a requirement for obtaining the slingshot, this jump is not useful.

After defeating the five Bokoblins harassing Lopsa, if you roll into the tree as the first Lopsa cutscene triggers, it will knock him out of the tree immediately. Lopsa will then ask you to help him out of the tree while on the ground, where upon you can talk to him again to trigger the second conversation.

This roll is frame perfect, and saves at most one second, so it is usually not attempted.

It is possible to reach the Deep Woods without obtaining the slingshot. After Machi asks you to find the Kikwi Elder, run to the Viewing Platform. Lure the Bokoblin patrolling the lower level to the stairs (either side) and then push it up the stairs. By charging a Skyward Strike at the top of the stairs and hitting the Bokoblin at the right angle, you can hit the vine leading to the Deep Woods.

This trick is not used in speedruns because the Slingshot is required to finish Skyview Temple.