Palace of Winds has gone through big changes in the past year. It used to be completely glitchless until mid-2016, when we finally found a way to skip the Moblin Fight.
However, late April 2017 is when the big stuff happened. Thanks to the discovery of Boss Door Clipping, we are now able to skip the 2nd half of Palace of Winds as well as the Power Bracelets.
Despite the big skips, Palace of Winds is still one of the more difficult parts execution-wise. The first two screens can be quite frustrating due to Peahat RNG, and the Wizzrobe Fight is considered one of the more difficult strats.
The boss fight isn't very RNG-heavy, but can still lose you a lot of time if Gyorg gives you bad attack patterns.

There are 2 main strategies for the Wizzrobe fight, one uses the Sword+Bombs and the other uses the Lantern+Bombs. Both are equally as fast, so use what you find easier. 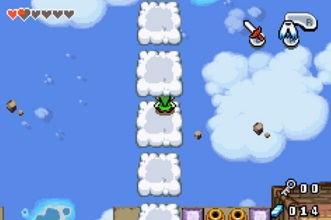 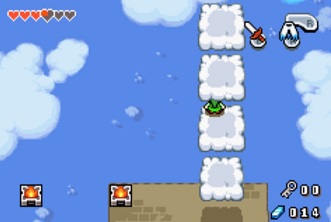 After acquiring Roc's Cape and jumping up the clouds to the next floor. You can make a precise jump over to the moving platform at the bottom left of the room. Skipping most of the floor and saving roughly 40 seconds.

It is possible to use Cutscene Ocarina Glitch after defeating the Ball & Chain Soldiers, which allows you to skip the Moblin Fight as well as a few screens, saving about 33 seconds.
You only have one try, as the cutscene will be gone once you're too late.

Skipping the 2nd Half of PoW

Thanks to Boss Door Clipping, the 2nd half of Palace of Winds can be skipped completely, allowing us to directly go to the boss after obtaining the Boss Key.

You do not have to mimic Red Gyorg's eyes to hit all of them, it is possible to hit him with most formations. The .' . and . '. formations seem to work best.
It's possible to hit Red Gyorg's eyes across 2 cycles with the same pair of clones.
Only the 3rd phase actually has RNG in it, as the Blue Gyorg is flying around randomly and shooting things at you from all angles. Try your best to dodge them in order to not have to get new clones.
It is also possible to hit the .'' and ''. formations without using any clones. The .' . and . '. eye formations cannot be done cloneless.
To do this, you need to stand in rougly these positions and slash your sword once: 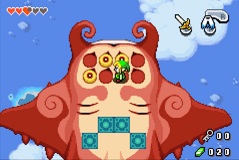 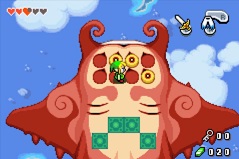