This page is under construction.

Dark Hyrule Castle, alongside Temple of Droplets, is one of the more broken dungeons in the game; however, unlike Temple of Droplets, it has been completely unaffected by Boss Door Clipping and remains largely exploitable through Ocarina Glitch. The most significant skips were found in January 2008, thus this section remains one of the older sections of the route.
Despite three notable sections where Ocarina Glitch skips large sections of the dungeon, the powerful enemies, tight execution of movement, glitches and the fights with Vaati make Dark Hyrule Castle one of the more difficult sections in the speedrun.

In the room with the four cannons it is possible to time a bomb explosion and a sword slash to destroy the cannons without entering the Ezlo Trigger or cloning to hit all the cannon at once. This requires placing and picking up a bomb immediately upon entering the room, throwing the bomb on a certain visual cue and then quickly rolling right and up to align yourself between the two cannons on the right. 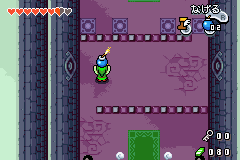 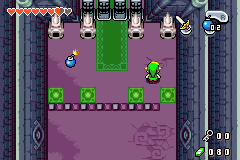 After the third Ocarina Glitch in the dungeon you travel oob to the right side of the dungeon and head up a couple staircases to collect a key. Immediately after you are required to jump over two doors locked from the opposite side using rocs cape. Each of these doors requires you to line up in a specific way so that Link is directly next to the edge of the room just before transitioning. Once lined up jump holding down left into the room transition, when the room finishes transitioning, hold left and Link should jump over the door.
The visual cue for the first door is just as Link is completely covered by the doorway, the second door is when the tip of the charged sword reaches the edge of the doorway.

It's possible to manipulate RNG such that the first darknut will charge straight down for the quick kill upon entering the triple darknut room before Vaati 1.

Entering the fight with Vaati 2, the first pattern of eyes will always be the bottom set, and each subsequent set will not be the same as the previous set, thus you only need to check the other three possible combinations. Before January 2017, when Vaati 2 3 Cycle was found, Vaati 2's fight was a 4 cycle fight with heavy RNG. It's still a heavy RNG fight but by spin slashing the second and third phases and slashing immediately after on the third phase it's possible to manipulate Vaati's health to kill him on the third cycle.

During the first phase of Vaati 3 try to get behind him and on to the portal, since when on the portal Vaati 3 is unable to attack you. Once he sends down one of his arms, hop off the portal and walk to the side to easily use the cane and quickly shrink down and go inside.
When inside the arm you can try to corner the eye but with the new route it is also possible to use the magic boomerang and stun him.

During the third phase, Vaati will immediately do the first of his two possible attacks, shoot four orbs downward from his eyes and proceed to alternate between attacks if you miss hitting the orbs. To more consistently hit the orbs, line up directly in front of him and make sure to time a single slash when the orbs get close. Spamming sword will dramatically decrease the chance that the orbs will hit.

Finally it's good to know that the precise number of slashes necessary to advance the cycle for Vaati 3 phase 2 is just 2 slashes, this is due to the low number of hit points needed to advance the cycle (8), thus after hitting Vaati 3 with two cloneless slashes you can quickly head down to clone again to give the most time for the next cycle.