The main feature of The Legend of Zelda: Four Swords Adventures is the ability to play the main adventure with friends, which requires a Gameboy Advance (or a Gamecube with the Gameboy Player Attachment) connected to the main console (Wii or Gamecube) via the GCN-GBA cable for each player. The original packaging of the game included 1 official Nintendo GCN-GBA cable. There are 3 modes available in multiplayer: Hyrulean Adventure, Shadow Battle, and Tetra Trackers (the last being exclusive to the Japanese and Korean versions).

As the main adventure mode, this is the only mode that can be played by a single player using either the Gamecube controller (with a GBA screen appearing on the TV) or a Gameboy Advance. The differences in co-op mode are mainly due to the rooms on the GBA screen and the inability to use the C-stick for formation hovers. Levels that differ from single player include, 1-1, 2-2, 2-3, 4-2, and 5-3. In addition, all of the boss fights are more difficult in co-op mode, especially Vaati.

Players can battle each other in 8 (4 light world and 4 dark world) stages. A variety of traps and items give players the opportunity to gain the upper hand against their foes.

This mode is pretty bad

To capture one GBA screen, you need a Gamecube (GC) with a Gameboy Player (GBP) attached and a Gamecube-Gameboy Advance (GC-GBA) cable to connect the GC to the main console. This is equivalent to just connecting a GBA, just that now you are able to capture the video output of the GC and can display it on your recording/stream. However, actually seeing it requires a second TV if you don't want to use the preview on the PC's monitor. For obvious reasons you cannot look at your GBA anymore to see it.

One advantage of using a GC is that you can use a GC controller, which makes mashing a lot easier (and controls in general). It is recommended to let Player 1 use the GC controller, as there is text that can only be scrolled by them.

Considering the requirements, it is not necessary to capture Player 2's GBA as well.

The graphic below explains the setup again: 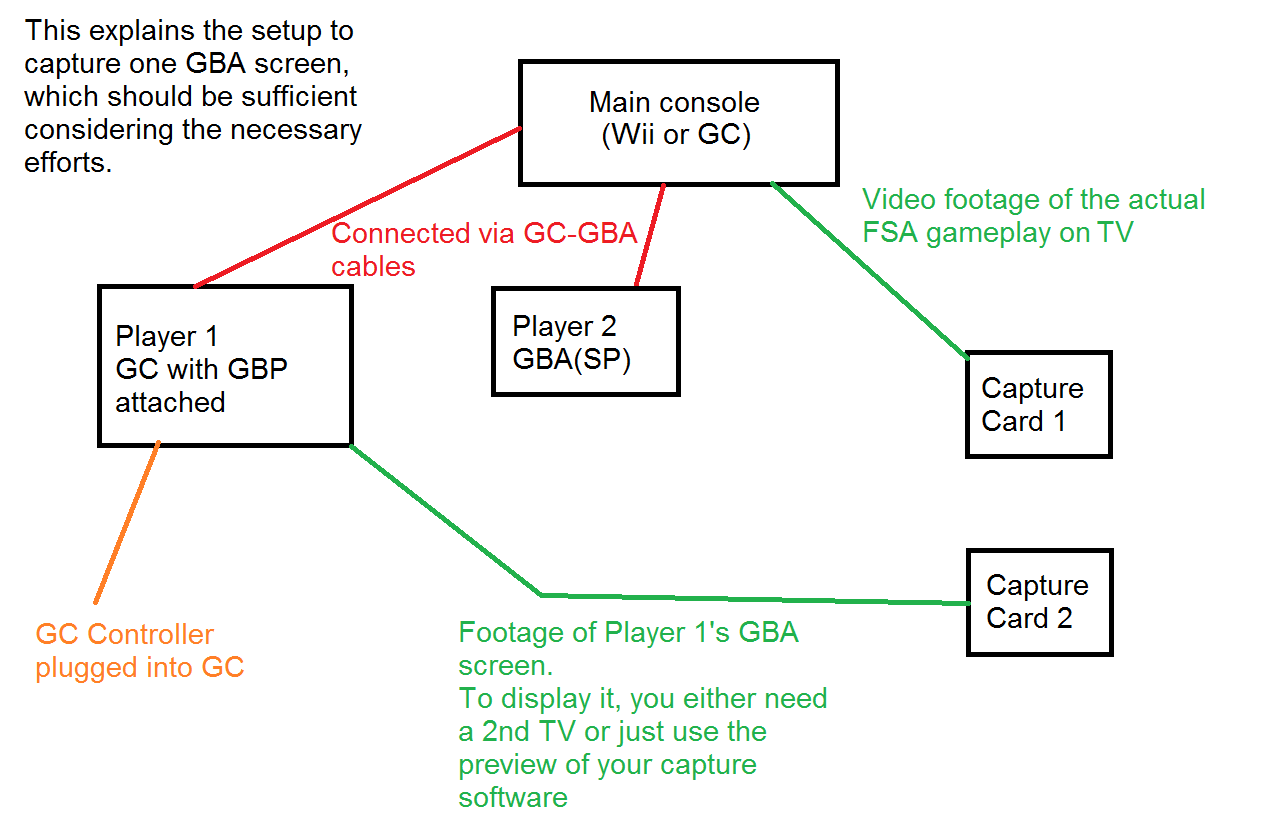