The Ocarina of Time Randomizer community and ZeldaSpeedRuns are proud to announce our second Accessible Randomizer Tournament! Similar to last tournament, we will be having a qualifying stage and a bracket stage, with some adjustments made to both of them. Many of the matches, including all qualifiers, will be streamed live on our Twitch channel: twitch.tv/zeldaspeedruns

The tournament will take place on version 4.0: https://ootrandomizer.com

Qualifiers start on February 9th and go until March 8th, Brackets will start shortly after.

We will be using the “Accessible” ruleset. Please be aware that the ruleset has had slight changes recently due to community voting. You can find the full ruleset here.

Qualifiers and Bracket races will feature slightly different settings. We would like qualifiers to be as inclusive as possible for beginners, then make very slight changes for the bracket to help with small issues such as misleading hints and logic.

Emulators are allowed. However, if you use an emulator, you must enable frame and input display if available, otherwise you must capture the entire emulator window.

For reasoning behind most of the listed settings, including some others that we discussed but excluded, please check here: Settings Reasoning 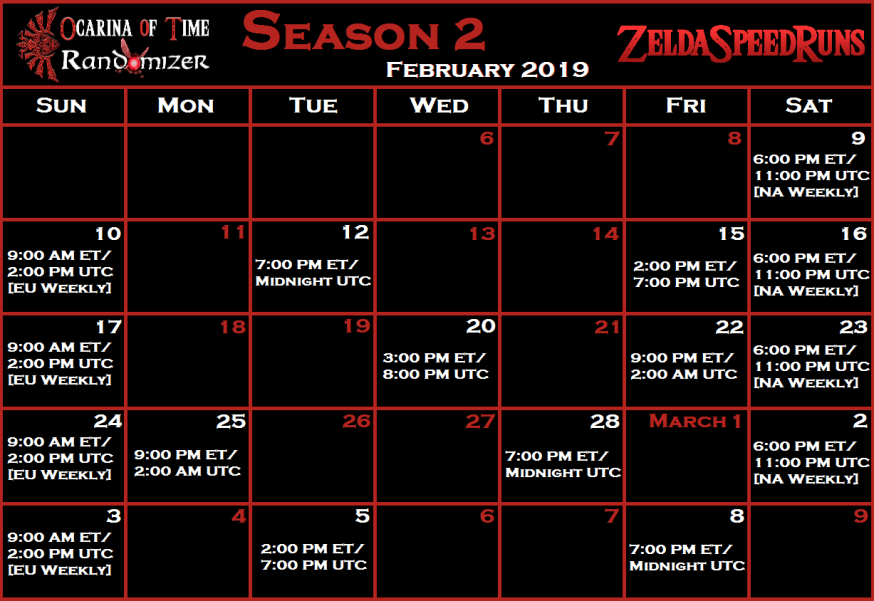 
This season, we will be handling qualifiers a little bit differently, but with the same overall format. There is NO sign-up necessary to enter qualifiers and have your points calculated for the leaderboard.

To see how last season’s standings would have looked using this calculation:

At the end of the qualifier races, the top 32 players based on point values will qualify for the bracket stage. In the case of a tie, the player with the highest individual point value from any race will win the tiebreaker. If it is still tied, the second highest race will be considered, and so on.

We are looking forward to this tournament and hope you will stop by for lots of Rando and high quality gameplay!